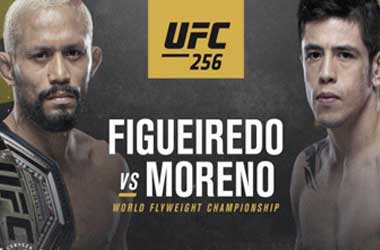 The UFC is heading back to the Apex Performance Center in Las Vegas on the 12th of December for the final event in 2020. UFC 256 night is shaping up to be an action-packed end to a season, one that saw the UFC going on hiatus due to the global pandemic.

UFC 256 will once again see Deiveson Figueiredo defending his championship belt against underdog Brandon Moreno. Figueiredo and Moreno both competed in UFC 255 last month with Figueiredo defeating Alex Perez to retain his belt and Moreno earning his shot to fight Figueiredo after he earned the victory in his bout with Brandon Royval.

There is no doubt the bout between Figueiredo and Moreno is the main attraction, but there is a solid lineup of bouts that will make the night a memorable one. This includes Tony Ferguson and Charles Oliveira in a lightweight bout, the second most talked about fight scheduled for the night. Also, Junior Dos Santos taking is scheduled to take on Ciryl Gane in the second heavyweight bout of the night, and Renato Moicano will face Rafael Fiziev in a lightweight bout, while Kevin Holland and Ronaldo Souza in will enter the octagon in a middleweight bout.

After his performance at UFC 255, oddsmakers are naturally favouring Deiveson Figueiredo to successfully defend his belt against Moreno. Whether Moreno suffers the same fate as Perez is arguable as Moreno is a different fighter and very capable of giving Figueiredo a run for his money.

Of course, attention will be drawn towards the Tony Ferguson/Charles Oliveira bout as it will be the first time Ferguson in fighting after suffering a brutal beating from Justin Gaethje. That said, looking at a little closer at the two main bouts warrants some additional evaluation.

No one can argue that Deiveson Figueiredo is a rapidly rising star in the UFC, and if his performance follows his previous bouts, he could find himself earning the title of Fighter of the Year. The control he has in the octagon and his dominating skills against opponents are the things that make legends. Figueiredo is a versatile fighter, and that puts him in a position which his opponents find challenging.

On the other hand, Moreno enters the bout with wins over his last three challengers. While he often is seen as the underdog, as he is against Figueiredo, oddmakers are starting to take notice as he was favoured against Royyal during UFC 255. That said, while he is the underdog, Figueiredo took notice of the dominance Moreno displayed over Royyal, and that led to the two heading lining UFC 256.

This one is not overly difficult to call, the odds are in favour of Deiveson Figueiredo, but make no mistake, the Tijuana, Mexico born Moreno is well versed in mixed martial arts and have been training since the early age of 12. He is a respectable challenger for Figueiredo, but ultimately, Moreno isn’t known as a strong finisher, and that puts Figueiredo in a commanding position to defend his belt successfully.

The second major bout of the night will see Tony Ferguson returning to the octagon for the first time since UFC 249. His last fight saw the seasoned fighter suffering a TKO loss in the fifth round against Justin Gaethje. This loss was seen as a major set back for Ferguson after winning twelve fights back-to-back. That said, he is the slight favourite, but with Charles Oliveira entering the bout with seven back-to-back wins of his own, Ferguson may find himself suffering a second back-to-back loss.

Oliveira is a hot commodity in the UFC after his racking up a constant string of wins. He hasn’t lost a fight since December 2017. His last five fights ended in submission, and two of his previous seven ended in knockouts. Oliveira is still in the prime of his career, and while Ferguson will be one of the most formidable opponents he has faced, his constant improvement and proven results suggest the bout will be evenly matched.

It is hard not to take notice of the damage Tony Ferguson suffered in his bout against Justin Gaethje. At 37, Ferguson is nearing the end of his career and while he is well -conditioned and a solid fighter, his age may play a factor when facing off against Olivera, a much younger opponent. This is a tough one to call, as you can see from the odds. However, if we are to give the nod in favour of one over the other, our money is going towards Ferguson for the win.