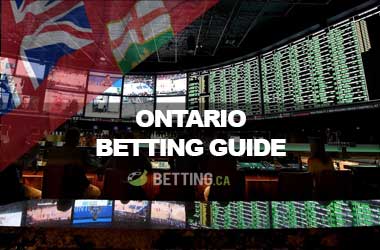 Ontario is considered one of the more progressive provinces in Canada. It’s got an MLS team, two NHL teams, three CFL teams, and the only NBA and MLB squads in the Great White North. Also, with over 14 million, Ontario is the most populated area and the second-largest in total area with an amazing number of lakes, 250,000 freshwater lakes.

With so many sports fans, it’s a shame that they have to deal with some really inferior sports betting products served by the government which can also be found in the other provinces as well all over Canada. This is why some of the wiser sports betting enthusiasts try to discover some better online options that are not tied to the official sports betting lottery in the country.

The residents of Ontario have access to some of the best sports teams in the country. Both pro and second level teams are very much exciting. Unfortunately, the wagering system provided and controlled by the government is of a lower caliber. It doesn’t offer the same excitement as off-shore online sports betting options do.

The current OLG Proline betting system provided is considered caveman today because people have to use paper and pencil to complete their selection process. This form is still present in some other countries too, but that doesn’t mean it’s supported.

And although wagers can be placed fairly easy by going to the nearest retail store which can be any store, there are much better and more accessible options online that doesn’t include leaving your home to make the bet. To make things worse, you can’t do that through the OLG Proline website. You can preview the selections list, but you still have to make the trip to place the bet.

The main features that characterize this system are:

But, the biggest drawback is not the trip making or the no single game betting rule. It’s the odds. They are really inferior when comparing them to the odds found at off-shore sports betting websites, where the competition is fiercer, which results with more favorable odds. It’s as if the OLG Proline group is guided by the “something is better than nothing” thought.

On top of that, some of the betting rules are downright unfair. For example, NFL bettors must choose whether the visitor or home team will win, which is OK. But, they have to predict that the team will win by at least 8 points. They can also make a Tie bet, but in that case the game must be decided by 3 points or less. In the online sports betting world this is considered completely unfair.

Despite all of the drawbacks with the government controlled sports betting lottery, Canada is considered one of the more relaxed countries towards gambling and sports betting. All gambling forms are legally regulated with the 1992 Gaming Control Act. With the Act, a way was made open for the first ever land-based casino in the province of Ontario.

So, sports betting is legal. And not only offline, but online too. There is a legal grey are in Ontario and all over Canada regarding online betting, which has not been addressed in any provincial law. The law says that it’s illegal for players to bet at unlicensed betting houses, but considering all off-shore sports betting websites are licensed somewhere, this does not concern bettors.

As a result, online betting is considered legal, and the citizens of Ontario or Canada in global are not persecuted for placing wagers at off-shore sports betting websites. On top of that, their winnings are not taxed at all.

The gaming law is enforced by the Alcohol and Gaming Commission of Ontario. Some provinces share the same agency, but Ontario has its own. It was established in 1998 and its job is to care for the public interest and oversee all gambling activities so that they are considered socially responsible.

Ontario is the second-largest province in Canada in total area, but the biggest in population. This province has 14 million residents and accounts for nearly 40% of all Canadians. The majority of Ontarians are of European decent, which means English, Scottish, Italian, Irish and French. The majority of the people in Ontario consider themselves Catholic and Protestant, but there is also a great deal that have not professed any religious affiliation. The official language is English, while French is largely spoken in the northeastern parts.

All of the offline venues that provide gambling services are owned and co-owned by the Ontario Lottery and Gaming Corporation. They manage 10 land-based casinos and directly operate with:

The other are operated by private companies which are licensed by the OLG such as Niagara Fallsview Casino Resort, Caesars Windsor, and Niagara. When sports bettors want to play some slots or table games, they can do that outside of the casinos too at some of the racetracks across the province. There are also poker rooms in each of the 10 land-based casinos operated by OLG. The largest of all venues is the Casino Niagara.

Ontarians like other Canadians have almost total freedom where to bet on sports. They have the option to make Proline bets, which is considered an inferior betting system, or to bet online where the variety is much bigger and the odds are much more favourable. At the moment sports betting is available only through retail stores, so players can’t bet on sports in casinos like in Las Vegas.