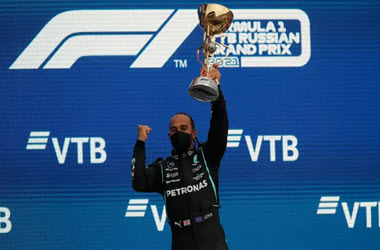 Lewis Hamilton raises his arm in celebration after winning the Russian Grand Prix and recording his 100th F1 victory.

Lewis Hamilton relied heavily on past experiences to become the first F1 driver to win 100 races at the Russian Grand Prix, a feat Michel Schumacher did not even accomplish.

Hamilton fought hard to recover after falling to seventh in the opening lap using strategic thinking, overtaking skills, and driving skills to navigate the rain slicked circuit. The victory put the seven time champ back in the lead ahead of Max Verstappen.

After managing to overcome the deficit, Hamilton was sitting second behind Lando Norris before rain began to fall. After being ordered into the pits for intermediates, a reluctant Hamilton heeded team orders while Norris opted against a tire change, a decision that ultimately cost him the race after he slid off the track.

“It’s taken a long time to get to 100 and at times, I wasn’t sure it would come. It’s a magical moment. I could only have dreamed of still being here and having this opportunity to win these races and get to drive with such phenomenal talents this late in my career.”

The win was Hamilton’s fifth win this season and the first since July when he won the British Grand Prix. It was also a big leap forward in the drivers champion as Lewis Hamilton was five points behind second place finisher Max Verstappen, heading into the race and two points ahead after it ended.

However, this year’s Russian GP was reminiscent of past races that saw Hamilton fighting hard after a rough start. The first challenge was overtaking Fernando Alonso, a driver who was a past teammate and rival for the 2007 drivers championship.

The start of the race was also not favourable for Max Verstappen, who started at the back of the grid due to an engine change. However, by the midway point, the Dutch driver had moved up the grid and had Hamilton in his sights. Hamilton, whose Mercedes performed well with hard tires, gave him the advantage over Verstappen.

The hard push by Verstappen also seemed to fizzle midway through the race resulting in his being overtaken by Fernando Alonso, dropping him back into seventh. However, once Red Bull switched to intermediates when the rain began to fall, Verstappen gained an advantage and an unexpected position on the podium.

After the race came to an end, Verstappen was heard on the team radio saying, “We didn’t lose so many points today, so that’s really, really good.” However, the question now is what is next for the remainder of the season and whether Mercedes will also have to replace an engine and how that will impact the outcome.

For Verstappen, he thinks his odds are fifty-fifty, and for Hamilton, he thinks the championship battle is too close to predict.

“Undoubtedly, it’s going to be tough. I think for the two-thirds of the season so far (Red Bull) had the edge. However, it’s been difficult with all sorts of things, curveballs sent to both of us and our teams. It’s still everything to play for in these next races.”

The problem going forward is, while our Russian Grand Prix 2021 Betting Preview predicted a win for Hamilton, it doesn’t take much for the outcome to change. That has many Canadian sportsbooks mindful of the odds, a benefit sports-minded punters can avail.

As for Lando Norris, after earning pole position, the team’s decision to gamble on dry tires when track conditions were getting slick cost him a top five finish and possible podium finish. On the flip side, if not for the rain, Lando most likely would have won as Hamilton was struggling to overtake the faster moving McClaren.

The move also was costly for McClaren, who was hoping to record back-to-back victories after Daniel Ricciardo won in Italy. The Aussie driver, who finished in fourth ahead of Valtteri Bottas, almost had another podium finish. Finishing in sixth place was Fernando Alonso, Norris took seventh, Kimi Raikkonen eighth, Sergio Perez was ninth, and in tenth was George Russel.