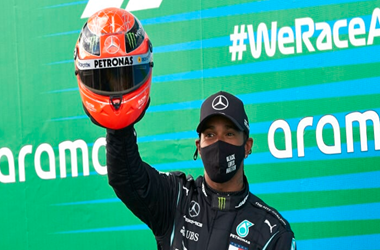 Lewis Hamilton has achieved what most thought was the impossible after he won the Eifel Grand Prix in Nurburg, Germany on Sunday. The win put Hamilton is a tie with F1 legend Michael Schumacher’s record of 91 F1 wins.

The occasion was one building all season as Hamilton once again has dominated the sport with wins in Australia, Hungary, Silverstone, Spain, Belgium and Italy. During the celebrations, Michael Schumacher’s son Mick, who himself is an F2 driver for Prema Theodore Racing, presented Hamilton with one of Michael’s old helmets. Schumacher, who retired from the sport a second time after suffering severe head trauma, has required constant care since while skiing accident in 2013.

Hamilton, who is now on the cusp of winning his seventh championship title and matching Schumacher’s championship wins. After teammate Valtteri Bottas passed him in the opening lap, Hamilton managed to retake the lead and now leads the driver’s championship by 69 points. After the race, Hamilton spoke with the media about the accomplishment and Schumacher’s achievements in the sport of F1 stating,

Hamilton now leads the driver’s championship by 69 points, his closest rival is teammate Valtteri Bottas. Hamilton spoke with the media about the accomplishment and Schumacher’s achievements in the sport of F1 stating,

“Seeing his dominance, I don’t think anyone, and especially me, didn’t imagine that I’d be anywhere near Michael in terms of records so it’s an incredible honour and it’s going to take some time to get used to. That number’s so big and when it’s so far away it’s hard for people to perhaps fully understand how hard it was for him to go those 91 wins, to deliver weekend in and weekend out, year on year on year and stay so physically in shape and so precise. So I understand that now more than ever, and I can only tell you that it doesn’t get easier from your first win to 91st. I’m telling you, it’s been a long, hard run.”

Hamilton finished in first 4.5 seconds ahead of Max Verstappen. Hamilton acknowledged post-race that the Red Bull driver pushed hard and made the race one of the most challenging of the season. Daniel Ricciardo managed his first podium finish of the season coming in behind Verstappen.

The Formula 1 circuit will now head to Portugal for the 2020 Portuguese Grand Prix. Fans wishing to place wagers on its outcome can do so with a number of online bookmakers. One of the more respected, Bet365 is offering new members up to $200 in sign up bonuses. That is over and above its many on-going promotions for existing players.

After earning pole position, Hamilton started the race faster than teammate Bottas and was on the inside line heading into turn one. However, with Bottas in his blind spot, Hamilton forced Bottas into the runoff area, but he re-entered the track and managed to take the lead going into the second corner. It took Hamilton twelve laps before Bottas ran wide after braking late, and it wasn’t long thereafter that the Fin exited the race with issues to is hybrid power unit.

Also exiting the race due to power issues after running strong and moving into third place was Lando Norris. After losing power, Norris’s McLaren caught on fire, and that resulted in the safety car being brought out. Ferrari once again struggled to be competitive with Leclerc starting fourth on the grid but unable to maintain his position. Sergio Perez was able to earn a fourth place finish just ahead of Carlos Sainz and AlphaTauri’s Pierre Gasly.

Canada’s Lance Stroll, who was unable to race due to illness, was replaced by Nico Hülkenberg. Hülkenberg, who started last on the grid managed to move up to eight, while Romain Grosjean took ninth and Alfa Romeo’s Antonio Giovinazzi took tenth. While Kimi Raikkonen plans on retiring from F1 at the end of this season, the Finn managed to finish twelfth and set his own record of 323 F1 career races. Raikkonen would have potentially had a better result, but due to an on-track incident with George Russell, race stewards hit him with a time penalty.

Sunday’s race, which was renamed the Eifel Grand Prix, was the first at the famous Nürburgring circuit since 2013. Race organizers reported that the race produced the second largest number of fans since the season restarted. It was expected that numbers would have been higher based on ticket sales, but due to coronavirus outbreaks in the area, many tickets were cancelled.