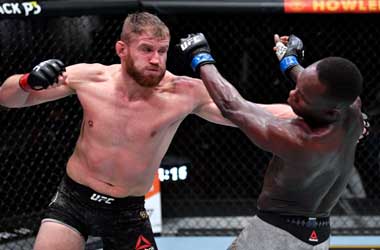 UFC 259 proved a night Israel Adesanya will not forget anytime soon after his attempt at simultaneously holding two championship belts came to an end after Jan Blachowicz was handed a unanimous decision in his favour last night at the UFC Apex Centre in Las Vegas, Nevada.

The night was the first of the year with three titles up for grabs, including Petr Yan defending his bantamweight title and Amanda Nunes defending her featherweight belt. The night was also one that saw two major upsets, one that saw Adesanya suffering his first defeat and Yan being disqualified in the fourth round for an illegal knee strike.

The only title bout fight that went as predicted was the Amana Nunes vs Megan Anderson bout, and it was far from entertaining after Anderson lost by submission just past the two minute mark of the first round. Nunes came out aggressively, landing 19 of 26 strikes, while Anderson landed two. Of the 19, 18 were deemed significant, and that resulted in Anderson attempting two submissions before succeeding and bringing an end to the fight.

Blachowicz, who at 38, was defending his title for the first time held off Adesanya after the Nigerian came out strong. However, while the two went back and forth, Blachowicz scored twice as many strikes as Adesanya and recorded three take downs compared to none for Adesanya.

After Blachowicz ended the final round with a flurry of strikes, Adesanya, who has yet to lose a fight since starting his professional career almost a decade ago, failed in his bid to join Henry Cejudo, Daniel Cormier, Conor McGregor and Amanda Nunes as a simultaneous two belt champion.

In the opening rounds, the fights looked like it was going in Adesanya favour as he was clearly the more aggressive of the two. However, Blachowicz tapped into his experience and kept Adesanya at bay until the fourth round before turning the fight into his favour. That included Blachowicz executing a perfectly timed takedown resulting in all four judges awarding him the round.

The fifth round didn’t fare much better for Adesanya after Blachowicz ended the round with another takedown and ultimately earned a unanimous decision. Blachowicz, who has fought in the UFC for six years, won his first championship belt in September. At 39 years old, Blachowicz is one of the oldest champions and in the UFC.

While the Blachowicz/Adesanya bout was clearly the main draw at UFC 259, the night’s biggest upset was between Petr Yan and Aljamain Sterling. The first, second and third rounds were pretty even, with both Yan and Sterling having moments of domination, but the fourth round saw Yan disqualified due to violating the rules, and that saw Sterling being handed the title.

The fourth round was coming to a close when Yan slammed his knee into Sterling’s face while he was kneeling on the mat. That resulted in the referee halting the fight after Sterling failed to get up, issuing Yan a warning and calling for the ringside doctor. After examining Sterling, the fight was called after it was determined the blow had caused Sterling to suffer a concussion.

It also resulted in Yan losing the title match as mixed martial arts clearly state striking or kneeing an opponent when they are down is illegal. As the fight was deemed over, it was clear Sterling was not pleased at winning the belt as a result of an illegal knee to the face from Yan.

Sterling, who needed help to stand during the announcement, showed the emotion of disappointment on his face. Commenting post-fight, Sterling said,

As for Nunes, she defended her featherweight title in her usual manner needing just over two minutes to put an end to Megan Anderson and extend her winning streaking to 12. The fight had barely started when Nunes landed shot to Anderson’s face and followed it with a kick to the lower leg and a takedown thereafter – and as they say, the rest is history.