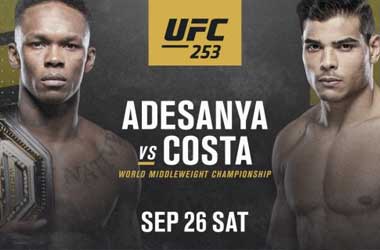 After Stripe Miocic earned a unanimous decision over Daniel Cormier during UFC 252, the action is set to continue with UFC 253. The main bout will feature Israel Adesanya taking on Paulo Costa in a middleweight title bout, while Dominick Reyes will face off against Jan Blachowicz in a lightweight interim title bout.

UFC 253 is scheduled to take place in Abu Dhabi in the United Arab Emirates on the 27th of September which will be the 26th for us Canadians, and by all accounts, is expected to be an action-packed night that also includes Kai Kara France taking on Brandon Royval in a flyweight bout.

The fight card also will feature Hakeen Dawodu and Zurbaira Tukhugov in a featherweight bout, and for the women, Ketlen Vieira will take on Sijara Eubanks in a women’s bantamweight bout.

The good news for bettors is that Adesanya, who is 19-0, is coming off from a victory over Yoel Romero. With wins over Robert Whittaker, Kelvin Gastelum and Anderson Silva, Costa is going to have his hands full against what is obviously a strong fighter and clearly capable of closing the deal.

Paulo Costa, aka “The Eraser” also has an impressive record with thirteen career wins, five of which came within the UFC. At 29, Costa is entering UFC 253 with a victory over Yoel Romero that saw the fighter landing some brutal shots, and likewise, being on the receiving end of some vicious shots.

Israel Adesanya has a reputation for creating separation in the cage, and he proved that despite having a smaller frame, it is more than capable of taking on larger opponents. The New Zealander is excellent in striking and is able to earn points as a result.

While his bout against Romero was anything but exciting, it proved that Adesanya can go the distance and is one who does not rely strictly on his ability to get into a brawl. The added mental fortitude will work in his favour against Costa, who is hoping to use his brawling techniques to his advantage.

One plus for Adesanya is his eight inch reach advantage, something that Costa is going to have to challenge early by getting in close. However, Adesanya is no slouch with his skills and is fast on his feet and quick to move to deflect or avoid shots.

Adesanya is favoured to win, and while Costa is a powerful opponent, the superior skills are expected to overcome the strength and power advantage of Costa. Ultimately, this could become a test of endurance, and with Costa’s bullish tactics, he could find himself in trouble.

Our Prediction: Adesanya to win by decision

Joining the main card for UFC 253 is Dominick Reyes and Jan Blachowicz, who will battle it out in a sanctioned light heavyweight bout. After Jon Jones moved up to the heavyweight division, it made room for Blachowicz to challenge Reyes, it will be his first fight defending his title, one he earned with a win over Jon Jones in February of 2020.

Reyes enters the bout with an advantage, in part due to his athleticism and footwork, yet Blachowicz, who was next in the pecking order to challenge Jones is being given a shot at Reyes. Blachowicz, who turned pro in 2007, has since returning to MMA fighting has a number of successful bouts included victories over Corey Anderson, Ronaldo Souza and Luke Rockhold. Both are expected to be patient in the opening rounds, but it is anticipated that Reyes will gain the advantage by picking away at Blachowicz enough that he will earn the win by decision.

Our Prediction: Dominick Reyes to earn the win