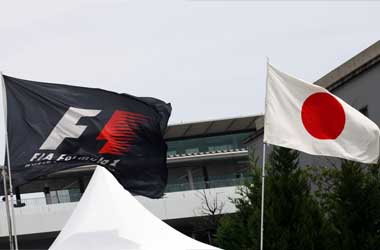 Only four races remain in the 2019 Formula One Season after the Japanese Grand Prix. After a confusing race at the Russian Grand Prix at the Sochi Autodrom, Lewis Hamilton looks to capture another victory after fending off the Ferrari’s at the Russian Olympic Park.

The win for Mercedes comes at a time where Sebastian Vettel and Charles Leclerc are battling each other for the first place position on the Ferrari Team. Their consistent battling at Sochi prompted issues for Sebastian and resulted in Charles taking third place in the podium. Vettel placed a DNF for losing his VSC at Turn 15, causing for him to park the car.

Subsequently, Mercedes was able to recapture the lead and place 1st/2nd on the podium.

Best Sports Betting Sites to bet on the Japanese 2019 GP

Regardless of this disappointing finish for Ferrari, nobody would have thought that after the summer break the team would be beating Ferrari for three consecutive races. It would have been four if the internal team issues weren’t factoring into the race. This is the first time in five years during the hybrid era that another team has seriously challenged the Silver Arrows. Vettel has already publicly come out and stated that the VSC Issues in both cars had been fixed going into the Japanese Grand Prix. Considering there are two long straights at the Suzuka Circuit, it will be hard for Mercedes to match the straight-line pace of the Tifosi Gang.

The history at the track for the last five years don’t apply to the betting odds. Before this years Japanese Circuit, there wasn’t any severe competition against Mercedes, allowing for Hamilton to win four the last five races at the Suzuka track. Charles Leclerc took his car to the circuit for the first time last year for Alfa Romero and placed at the bottom of the grid. Vettel hasn’t won at the Suzuka Track since 2013, which has prompted some Ferrari Fans to be concerned moving forward into October 13th, 2019.

The top three drivers for the October 11th to 13th racing weekend haven’t changed since our preview of the Russian Grand Prix. The list remains as Lewis Hamilton, Charles Leclerc and Sebastian Vettel. Surprisingly, one of the Ferrari Drivers hasn’t moved down a placement since Valtteri Bottas placed second at the Sochi Autodrom. Lewis Hamilton will be looking to win a second consecutive racing, cementing his championship win for the season. Charles Leclerc would have to win the next four races back to back to rival Hamilton for the championship. This is an unlikely task that can’t be accomplished without the assistance of Vettel’s defending capabilities. It will be interesting to see if Ferrari can work out their internal struggles to give Leclerc his first F1 Victory. Most anticipate otherwise.

There officially isn’t a better driver in history than Lewis Hamilton. He has been the champion for Formula One five times, with a six championship coming shortly. This would mean the 34-Year-Old driver would not have only led more races than Michael Schumacher but also have won as many titles as the Ferrari Legend.

Considering it’s anticipated that Hamilton will win the 2020 Season. It won’t be long until this British superstar becomes the most significant F1 driver in history. Some were speculating if Hamilton would accomplish his goals after losing the last three races back to back. However, he quickly showed the racing world that his strengths as a driver hadn’t been forgotten.

After winning the Russian Grand Prix, where Mercedes has won every race, he looks to win the Suzuka Grand Prix.

Everyone is still looking directly at Charles Leclerc, the 21-year-old driver for Ferrari. Not only is he the youngest driver in Ferrari’s history, but he has become one of their most loved drivers in recent decades.

Charles has had the pace to continuously defeat his rival Verstappen and challenge the likes of Lewis Hamilton or Valtteri Bottas. When the season first began, Charles wasn’t looking impressive, having continuous mechanical errors or being told not to overtake Vettel.

However, when his best friend in Formula 2 passed away, Charles showed his full talent to Ferrari. This first became evident at Monza, where the Malta Native won the race for the Tifosi Gang. It was the first time Ferrari had won at the circuit in nine years. Charles now moved forward looking to win the next four races, or cause Hamilton to fight desperately for the win. It won’t be long until this young superstar wins his first championship.

Sebastian Vettel, the former champion of Formula One, has had a challenging 2019 Season. The driver has seen mechanical errors, multiple penalties and small mistakes that placed him at the bottom of the grid. It wouldn’t be until the Singapore Grand Prix that the German Four-Time Champion won a race in the 2019 Season.

Many are beginning to speculate if the ageing driver has the capabilities to win another championship for Ferrari. The truth of his talent will be revealed in the 2021 Season when rules and regulations are changed.

Vettel will have to fight for the remainder of this season and 2020 to prove his placement at Ferrari in 2021. It will be interesting to see how he reacts at Suzuka with the recent VSC Failure at Russia.

Lando Norris is the newest British superstar on the Formula 1 Grid, racing currently for McLaren. However, eyes have begun turning to the young driver as he’s regularly placed P5 throughout this season. It’s gotten to the point that Toto Wolff has taken Norris as his new apprentice. This means that the Mercedes team manager sees the same talent in Norris that Hamilton has today.

The chances that Lando Norris could be replacing Valtteri Bottas in the 2021 Season is growing stronger after every race. The longer that Lando actively competes against Bottas and wins will enable the young driver to receive one of the Silver Arrow Cars.

Until then, this dark horse plans to take his McLaren car to new heights before the end of the season. The goal is to place P1 to P3 on the podium before Abu Dhabi.

The Suzuka Grand Prix in Japan is going to be memorable, with different grid placements than there has been in recent memory. Though the Mercedes AMG Racing Team has speed in the corners, they don’t match the same speed as Ferrari down the straights, even with DRS enabled. Due to the long straights of Suzuka and wide turns, it’s anticipated that Charles Leclerc will outpace Lewis Hamilton by 3 to 6 seconds.