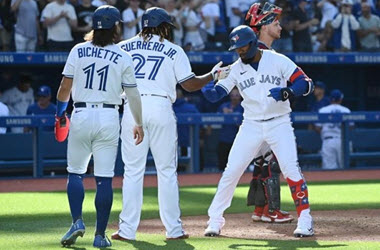 Teoscar Hernandez of the Toronto Blue Jays celebrates with Vladimir Guerrero Jr and Bo Bichette after hitting a three-run homer against the Minnesota Twins on Saturday in Toronto at the Rogers Centre.

After succumbing the Minnesota Twins on Friday in the first of a triple header, Teoscar Hernandez scored a three run homer on Saturday to give the Jays a 6-2 victory over the Twins. The triple run saw Hernandez unseating Vladimir Guerrero Jr. for the lead in RBI’s.

The victory was welcome news for the organization and resulted in the Blue Jays beating out the New York Yankees for the second AL wild-card spot. Hernandez now sits behind Salvador Perez and Jose Abreu in third in the American League with 106 RBI’s.

The New York Yankees, who are 83-66, lost their chance at the wild card spot after getting decimated 11-3 by Cleveland. The first wild card spot went to the Red Sox after they secured a 9-3 win over the Baltimore Orioles.

Vladimir Guerrero Jr was on the outside at having a chance at the AL triple crown. With two RBI’s behind Hernandez, he has a .318 batting average, 46 home runs and is now in fourth in the American league for RBI’s.

At 28, Teoscar Hernandez has stated that working on the mental side of his game has been one of the reasons for his consistent and productive season. The consistency on the field and behind the plate hasn’t gone unnoticed by the organization and fellow teammates like Steven Matz.

“He’s been the best hitter on a lot of teams. He’s easy to overlook with how good this lineup is. He’s been amazing.”

Minnesota was looking like they were on their way to their ninth back-t00-back win against the Jays, a record they first established in August 2027. By the bottom of the first inning, the Twins were up by two runs after former Jay, Josh Donaldson hit a two-run homer

However, after the tw0-run homer, Metz got in his grove and retired the next 16 batters. That helped Metz improve his highest average of run stats to 8.07 per game. Adding to the starters stats are his winning his last four decisions.

For MBL punters wanting to bet on the upcoming World Series, they can use this valuable information when wagering with sportsbooks offering Canadians generous signup bonuses. Now tied with Hyun Jin Ryu for the lead, Metz acknowledged Ryu’s struggles during his last two starts.

“To be in a hole like that, you just want to make good pitches and put up zeroes. I just wanted to keep it close and wait for the bats to come alive.”

The Jays picked up speed going into the fourth after Marcus Simien hit a solo to left field, and in the process becoming the fifth second baseman in the history of the MLB to record forty of more homeruns in a season.

After the Simien hit, the Twins walked Vladimir Guerrero Jr. before Bo Bichette sent a single to centre field. Also recording another hit for the Jays, Hernandez hit the slider that earned him his two run homer of the game and his 28th of the season.

“I knew I hit it good, but just a little high.”

The Toronto Blue Jays were able to add to their lead in the seventh inning after Minnesota reliever Jovani Moran walked George Springer, Alejandro Kirk and Guerrero. The resulted in Twins coach Rocco Baldelli bringing Kyle Barraclough top the mound. Unfortunately for the Twins, Bo Bichette welcomed Moran with a two-run single to left field.

After the seventh, the Twins, unable to capitalize on the remaining innings, and while it brought an end for Met, it also ended their losing streak against Minnesota. While Miguel Sano managed to hit a single to centre field, Jays reliever Trevor Richards finished the sixth before Tim Mayza came in to close the night.