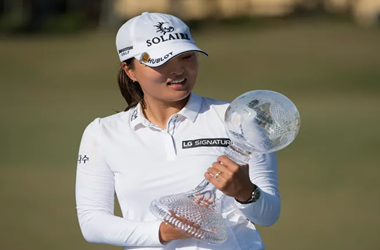 Jin Young Ko poses with her trophy after winning the CME Group Tour Championship on Sunday in Naples, Florida.

As the LPGA wrapped up its regular season this week at the CME Group Tour Championship, it was a season many were happy to see come to a close. While the year was marred by the COVID-19 pandemic, there were moments of celebration. These came with the return of golf, albeit, without fan participation.

After missing out on most the season, this week was especially rewarding for Jin Young Ko after she earned her seventh LPGA career title. With the win and its $1.1 million paycheck, Ko shot to the top of the LPGA’s money makers in 2020.

Ranked No.1 in the world, Ko ended her season shooting a 6 under 66 during the final round. That included finishing the final hole with a birdie, and that gave Ko a respectable five shot lead over the second and third place finishers, Hannah Green and Sei Young Kim.

Hannah Green, who was celebrating her 24th birthday, finished the final round with a 67, good enough for second place, and Sei Young Kim ended her final round of the season with a 72 and a third place finish. That score was also enough to see Kim winning the Rolex Player of the Year.

The final round began with Ko, who was one shot behind Kim, jumping into the lead after scoring a birdie. However, that was just the beginning after the Korean also scored birdies on the 12th, 13th and 14th holes. After almost scoring another in the 15th, one that fell short of dropping into the cup, Ko secured her win with a birdie on the 16th, a run that was her vest all season.

The win strengthened Ko’s No. 1 ranking, one she has held since July 2019, it also increased her career winnings to $5,600,824 and added her to the LPGA’s list of players who have topped the $5 million mark in career winnings.

Considering Ko only played four LPGA events this season, she did play in six on the Korean LPGA tour preferring to stay to close to home due to the coronavirus pandemic. For the season, Ko managed to bring in $1,667,925 is winnings, a number helped by her 2nd place finish at last weeks U.S. Open.

Sei Young Kim, who went into the final round with a marginal one stroke lead, watched her hopes of winning the CME Group Tour Championship and the Player of the Year award vanish after failed to land a twenty-five foot putt on the 15th hole and fell four strokes behind Ko.

After scoring a 68, Mina Harigae finished the final round in fourth, her best career performance since joining the LPGA. Lexi Thompson ended the round with at 11 under, tying Lydia Ko for fifth. Thompson was leading the tournament after the first round, but bad luck struck and that brought an end to Thompson making its eight years in a row with an LPGA victory. Thompson, who hails from South Florida, spoke to the media about the final round and the upcoming 2021 season stating:

“Definitely a good ending to the year and to the week. It was nice to have a few people out there supporting us,” Thompson said. “I think the fans make the game, so hopefully we’ll get back to that in 2021.”

The CME Group Tour Championship was the last tournament for 2020, one that saw the LPGA season cut by half as a result of the pandemic. The first LPGA event of the 2021 calendar will take place between the 21st and 24th of January in Lake Buena Vista, Florida for the Diamond Resorts Tournament of Champions

For punters, as it was with all sports, the LPGA was at a standstill for almost six months. However, with the 2021 season expected to return to its full 34 event schedule, those wanting to get a jump can sign up with bookmakers offering lucrative signup offers.