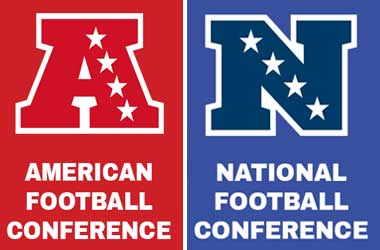 The weekends divisional round saw some exciting action between the eight that remained with most of our predictions coming true.

After the 49ers defeated the Vikings, the Titans the Ravens (which was our only incorrect prediction), the Chiefs defeated the Texans, and the Packers came out on top of the Seahawks, we have our final four.

This will see the Titans taking on the Chiefs next Sunday for the early card at 15:05 ET for a final spot, and the Packers will face off at 16:40 ET against the 49ers in the nightcap for the other spot in the NFL Conference Championships.

While the action ultimately will be decided on the field on Sunday, let’s take a closer look at the four remaining teams and how they fare against each other.

Best Online Sportsbooks To Bet On The 2019 NFL Season

Kansas City head into next Sunday as clear favourites with bookmakers and fans alike. They may have struggled at the beginning on Sunday and looked like they were in trouble after going down 24-0 but not only overcame the deficit but took control of almost all subsequent possessions. While the Texans were impressive in their own right and fought hard to retain control, Patrick Mahomes and the Chiefs seemed nearly unstoppable charging hard for extended periods to squash the Texans.

The Titans for a second week in a row were unrelenting in their defense and ground attack, all of which was responsible for them earning a spot in the post-season and the final four. Tennessee may not have scored as many touchdowns as the Chiefs, but have done well in the past with the unfriendly welcome they receive at Arrowhead. There is little doubt that they have shown their resilience and the less than favourable welcome will not deter them from focusing on the job at hand. However, they will go into Sunday’s game as the underdogs, whether they overcome that will depend on their defense and ability to capitalise on plays.

The 49ers and Packers are both heading into next Sunday on equal footing with neither being touted as favourites to win, while the 49ers were last Sunday, the job ahead in defeating the Packers will be a lot more difficult. One of the challenges they will need to contend with is Aaron Rodgers, who has the talent to get Green Bay into the danger zone. However, when looking at the 49ers victory against the Vikings last Saturday and their strong defense, the 49ers have plenty up their sleeve to combat those challenges.

As for Green Bay, they will need to find ways they can improve their passing game, and a big part of that will be relying on Davante Adams, who was instrumental in getting the job done against the Seahawks. The problem is the 49ers are not the Seahawks, and on their home turf have averaged only 154.3 passing yards per game. For Rogers, finding openings will be his greatest challenge and in part why oddsmakers are showing the two even.