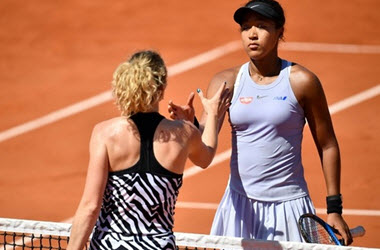 Naomi Osaka’s winning streak came to an end during the third round in Paris at the French Open after losing to Katerina Siniakova in two sets. That brought an end to Osaka’s dream in her pursuit of winning three consecutive Grand Slam Titles.

What brought about her demise can be argued on multiple levels. Her play was filled with both forced and unforced errors, frustration was seen in each of her matches, but it became apparent that the pressure this young tennis star faced after earned the number one seeded spot.

Osaka’s loss was the first of two that came as a surprise. Several hours after losing to Katerina Siniakova, Serena Williams lost to Sofia Kenin. It was a big loss and reality check on maintaining focus and not allowing yourself to be impacted by pressure for Osaka, who was trying to be the first women since Serena Williams, who won four in 2014/2015, to win three major trophies consecutively.

Williams to date has won twenty-three titles, and is just one title away from being the player with the most titles, even passing the record of Steffi Graf, who racked up twenty-two before retiring. All Williams needs is one more, and she will topple the record held by Margaret Court. That record is one not lost on Kenin, who commenting on Serena said,

“Serena is such a tough player. I’m still trying to process what just happened. She’s a true champion and an inspiration.”

Born in Moscow, Kenin speaks both English and Russian, moved to New York City while still a baby and now resides in Florida. Commenting on her American citizenship, Kenin said,

“I’m proud to be an American. I think it’s great we moved to America for a better life for me.”

This is Kenin’s ninth major and she will now move on to the final sixteen and is guaranteed to earn €243,000 for her efforts, and that is on top of the €43,250 earned already. Kenin is slated to face Ash Barty, who earned her spot in the final sixteen after she defeated Victoria Azarenka.

Serena Williams is still working towards a comeback after being off for two years as a result of giving birth and complications surrounding it. Williams managed to advance to the fourth round at the Open last year but exited due to an injury to her chest muscle. Her best performance was making the finals at Wimbledon last year and in January of this year, made it to the quarterfinal at the Australian Open.

Williams has only played a limited number of matches since Australia due to injuries, one to her knee, the other due to being sick. She was considering not playing at the French Open this year, but commenting on it, stated,

“I’m glad I came, at the end of the day, but it’s been a really grueling season for me.”

In post-match interviews, Williams was asked if she felt her performance was satisfactory when factoring in her issues. She replied stating she did not expect to go out in the third round, but her coach, Patrick Mouratoglou said,

“All I know is, she was not ready. And it was obvious, I think.”