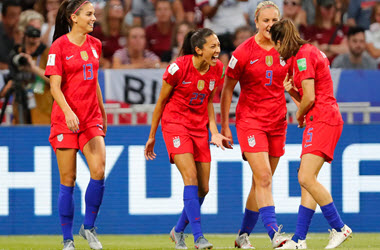 U.S forward Christen Press and teammates celebrate after scoring against England during the semifinal match at the 2019 Women’s World Cup.

The showdown between the United States and England during the semifinals was one hotly debated. Each offers equal levels of skill, and each was hungry for the win. However, it was Alyssa Naeher stopping a penalty kick late in the match that saved the day for the U.S and led them to a 2-1 victory over England.

The win has put the United States one step closer to defending their Women’s World Cup title. , and they now will face the winner between Sweden and the Netherlands. For World Cup punters, the upcoming Wednesday match is a perfect opportunity to get bets placed on the outcome with favourable Canadian friendly sportsbooks such as Bodog.

The U.S was with starter Megan Rapinoe, who was on the sidelines with an injury to her hamstring. That saw Christen Press starting in her place, and she made the best of it scoring the opening goal at the 20th minute mark to put the United States up by one.

England responded to tie the match Ellen White scored, but it was the U.S’s Alex Morgan that scored just before the first half to put the U.S in the lead again, and it will be a birthday to remember for the star athlete who on Tuesday turned 30. Morgan’s goal was her first since the U.S’s win over Thailand in their opening match. After the goal, pretended to take a sip of tea. Commenting, Morgan said,

“I feel like this team just has had so much thrown at us, and I felt that we didn’t take the easy route to the final this tournament, and that’s the tea.”

That cross, followed by THAT header 🤩

The goal by England’s Ellen White was her sixth in the tournament, and she nearly had another, but it was overturned after a video review, and that saw U.S supporters in the crowd cheering. Yet, the nerves grew tense after a review of a foul on White was in favour of England. It resulted in a penalty kick that had it been successful, would have tied the match. However, Alyssa Naeher stopped the shot by England’s Steph Houghton and that a first for a U.S goalie at the World Cup during regular time. After the match, asked if that save was her biggest, Naeher said “Probably up there, yeah”, then added,

“It’s a special team and everybody fought hard tonight for all 90 minutes. Players on the field, players on the bench, ready to come in and make differences. Obviously Christen coming in and starting tonight and scoring a great goal was huge for us. And I think it’s just a testament to the team.”

Families celebrating their loved ones’ accomplishments will never not makes us immediately cry 😭❤️ pic.twitter.com/n2lFPpURXI

The United States has made it to the semifinals in each of the eight Women’s World Cups and have won the trophy three times. It’s only final loss was to Japan in 2011, but that did little to interfere with the U.S being the nation with the most trophy’s.

The U.S has won eleven matches in a row and has gone 16 matches without a loss. They have shown confidence since arriving in France defeating all who they have faced, and for the Netherlands or Sweden, the battle they will face will most likely be the toughest they will go through should they manage to beat what seems like, an unbeatable team.