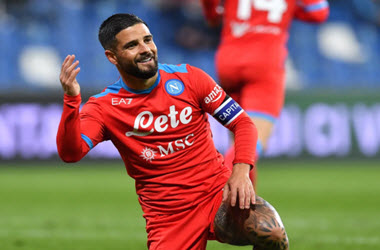 Toronto FC president Bill Manning announced to the media that the club had signed Italian winger Lorenzo Insigne to a four year deal. The announcement, which comes on the heels of the clubs worst season to date, is designed to put the club back in the right direction.

The interest in Lorenzo Insigne came to light during a September board meeting by club owner Maple Leaf Sports and Entertainment while discussing local interest in Italy’s chances in their bid to win the European championship.

Manning, who was hired in 2015, had presented the club with a five-year plan, said he had given his opinion on what was needed to revive the club, and Insigne was the name that topped the list. Little did Manning know his plan would become a reality only a few months later.

“This is a historic and exciting day for our club. Lorenzo is a world class attacking player in the prime of his career. He was a European champion with Italy and has performed on the biggest stages during his club career with Napoli. Lorenzo has the talent to change games. He plays the game with joy and passion, and our fans and supporters are going to love watching him as a member of our team.”

Insigne, who scored 114 goals and 95 assists in 416 appearances for Napoli, has signed the 4 year pre-contract to join Toronto FC. When he makes his first appearance in July, the former Napoli captain will be 31. During his eleven seasons with Napoli, he helped the team with the Coppa Italia in 2013/14 and the Super Cup in 2014/15.

The star forward will remain under contract to SSC Napoli until the current season ends on May 21, leaving the Insigne a little over six weeks before making his first appearance with Toronto FC. The deal, which Manning called a “transformational signing” for the league and the club, especially considering Canada will be co-hosting the 2026 World Cup.

The signing is good news for TFC fans who have watched the 2017 Champions fall out of grace, finishing in second to last place last season. The team, which struggled due to COVID restrictions, finished the season with a record of 6-18-10.

“Toronto FC’s really been out of market for two full seasons (due to the pandemic). And we lost a buzz. We lost a buzz in this market. Lorenzo Insigne is going to be a player that people want to come see.”

At five foot four and weighing in at 132 pounds, Insigne is known for packing a punch. Not only can he attack across the field, but he is known for using his ball skills, speed and powerful shot as a left winger. After the signing, Toronto FC posted a short social media message from Insigne in his native tongue.

“I want to say hello to all the fans in Toronto. I’m excited for this new adventure. I want to thank the club and we’ll see you in July.”

The signing of Lorenzo Insigne and Toronto’s ambition to return to the top of the league was welcome news to Toronto’s large Italian community. So too was the news of the contract, which was higher than other European clubs. It will make Insigne the highest-paid player in the Major League Soccer League.

The signing was also welcome news to head coach Bob Bradley, who took over the position in November after long-time coach, Chris Armas was terminated. While TFC has expressed interest prior to Bradley signing up as head coach, he was 100% on board and called the forward’s ability something “special”.

” We are all looking forward to having Lorenzo join us this summer. His ability to create chances for himself and his teammates is special. Having watched him for many years, I also know he’s also a player who works for the team. Lorenzo is the kind of player you come to watch, because there’s always a chance, he’ll do something unforgettable.”

The 2022-2023 season will kick off on March 5th when the TFC host the New York Red Bulls for their season opener. While fan attendance is still unknown due to current COVID infections, tickets are available via the TFC box office unless restrictions prevent fan attendance.