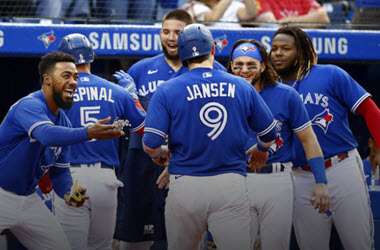 Blue Jay Danny Jansen is congratulated by teammates on Sunday after scoring a homer as the Jay’s swept their three game series with the Baltimore Orioles at the Rogers Centre in Toronto.

On Sunday, the Blue Jays were in good spirits after George Springer hit two homers as the team battled with Yankees and Red Sox’s for the last AL wild card.

However, as the Toronto Blue Jays headed to the clubhouse to celebrate their 12-4 win over the Baltimore Orioles and sweep of the three game series, it didn’t take long for moods to change after realizing the Red Sox’s were up 7-5 in their game against Washington Nationals.

For outfielder George Springer, the realization their fate was in the hands of another team was a stark reminder of how quickly things can change.

“You don’t ever want your fate in the hands of somebody else, but that’s just the way it was, is, hoping for the best, but it didn’t happen.”

The battle for the remaining wild card had put the Blue Jays in a precarious position. In order to make it to Monday’s AL wild card tiebreaker game, they needed to win and the Yankee’s or Red Sox to lose.

Things were looking for the Jays until the Yankees pulled off a ninth inning win during their game against Tampa Bay Rays. It only got worse from there after the Red Sox, down 5-1 against the Washington Nationals midway through the game, pulled off a win with a comeback that included a two run homer.

After the Jay’s left the field on Sunday, many in attendance stuck around at the Rogers Centre to watch the last inning of the Red Sox/Nationals game in the hopes the Jays would advance. Yet, their hopes were dashed, and it now comes down to who will win the AL wild card game.

That battle will be played out between the Red Sox and the Yankees on Tuesday at Fenway Park. The moment was bittersweet, and one that wasn’t helped by the Jay’s losing two games of their tripled header against the Yankee’s earlier in the week.

For Blue Jays manager Charlie Montoyo, the start of the season didn’t go as planned after the club divided their home games between Buffalo and Dunedin, Florida. By late July, the Jays had recorded 25 home game wins after returning to the Rogers Centre and sat atop the American League by September.

While the season didn’t end as anticipated, Montoyo feels that the push towards the MLB playoffs will do a lot to help the Jays improve.

“They gained a lot through these games, they were must-win games.”

After posing for a team photo before Sunday’s game, Montoyo held a meeting and told his players he was proud of their season, and that was not lost on Bo Bichette.

All looked good for the Blue Jays after Vladimir Guerrero Jr. hit a two run homer in the second innings to record his 48th of the season. That put Guerrero Jr. in the record books for the most homers in a season by a player 22 years old or younger. The previous record was set in 1953 by Eddie Matthews for recorded 47 in a single season.
Guerrero Jr, who ended the season with a .311 average, won the league’s homer crown and AL batting title and finished second on the team with the most RBI’s. At 111, Guerrero Jr was five RBI’s behind Teoscar Hernandez.

“It’s sad, but we just have to move on. I think this will make us a stronger team, a better team next year.”

The final homer for the Jay season finale came from Marcus Semien. That gave Seimien homers for the season and another record for he and Guerrero Jr, who became the sixth set of teammates to record 45 or more homes in MLB history. They also became the first to do so since 2005 when Manny Ramirez and David Ortiz did the same while playing for the Red Sox.

While Semien will be eligible for free agency during the off-season, he isn’t averse to re-signing with the Jays.

“We had the best offence in the major leagues, and in my mind, the best starting pitching in the game. Who doesn’t want to be a part of that? There’s little pieces to add to get to the next level. I’m one of them. I think our bullpen is another one. We also have young, young guys getting better. We’ll see what happens, but I had a great time here.”