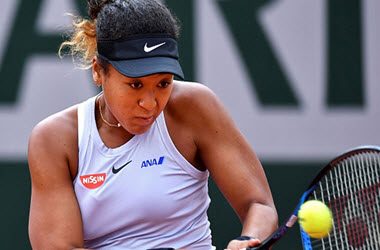 Naomi Osaka returns service against Victoria Azarenka in the second round at the French Open in Paris, France

Naomi Osaka frustration continued during her second match at the French Open against Victoria Azarenka, a former No. 1 and it saw the current No. 1 seeded player sighing and rolling her eyes after missed opportunities and errors.

Osaka had a rough start in her opening match against Anna Karolina Schmiedlova, and it seemed her second was going the same way, but after multiple slipups and behind one set, she managed to pull off another comeback to defeat Victoria Azarenka 4-6, 7-5, 6-3. Speaking on her strategy and style of play, Osaka, post-match commented,

“I have this mindset that I feel like I can win if it gets down to the wire. Like, if I have to break a person, I feel like I have the ability to do that. So I probably shouldn’t wait until the last minute.”

It is waiting until the last minute that saw Osaka having to battle and go three sets in each of her two matches. It saw Osaka dropping four games in the first set to Azarenka and making seven unforced errors. Commenting, Osaka said,

“Technically, like, she kind of killed me in the first set, and I just kept trying to find a way to stay positive.”

It was that same resolve that was needed by Simona Halep in her second round match against Magda Linette, who is ranked 87th. Halep gave up a huge lead during the second set and needed three match points to finally take the win 6-4, 5-7, 6-3.

Afterwards, Halep mentioned she wasn’t feeling well and was intending on spending the following day sleeping, and after giving having her service twice broken, it sounds like it is needed. Especially after seeing both Osaka and Halep failing to have the performance that Serena Williams displayed in her opening match against Kurumi Nara.

Azarenka worked hard trying to control Osaka with deep attacking strokes and also by going after the Japanese players’ backhand side. Azarenka has played on the big stage before and understands how to perform and has won two titles while playing the Australian Open, made it to the U.S. Open finals twice and was a semifinalist at the French Open and both Wimbledon in 2013, Commenting on her performance against Osaka, Azarenka said,

“I played very smart. I really played the right spots. I was doing everything that I was supposed to do. And, especially, moving well and pushing her back.”

Currently ranked 43rd, Azarenka saw her rank drop after taking time off due to a pregnancy and having to deal with issues relating to custody of her son. In so far as her talent, Azarenka showed her skill as she ran across the court to return a cross-court forehand after battling a fifteen stroke exchange with Osaka.

The two played for over 2.5 hours, and at one point in the second set, Azarenka was up by two games and had the chance to go up further but missed multiple opportunities including a breakpoint that would have put her up 5-2.

Azarenka downfall was her serve that faltered as the match went on, and Osaka’s incredible returns were also a key contributor that saw her eventual demise to Osaka. It was enough for Azarenka to mention the confidence that Osaka possesses.

That confidence comes on the heels of two back-to-back Grand Slam titles, one at the U.S. Open, the other at the Australian Open. It is also that confidence, and the confidence of punters that has seen odds favouring Osaka going up, especially with online sportsbooks such as Betway Sports, a leading sportsbook provider offering tennis betting. Continuing with her comments post-match, Azarenka said,

“She’s very powerful. She’s very explosive. Her shots are pretty heavy. She can hit both sides, pretty even. She has a big serve, and she’s consistent. … And proving that she deserves to be where she’s at right now.”

That is all true, and that in itself made the post-match comments by Osaka all the more interesting after stating she felt like the challenger in the match. Osaka added,

“”Like, I know she went to the semis here before, so obviously she has a lot more experience here,” said the 21-year-old Osaka, who has never been past the third round in Paris but is 9-1 on clay in 2019 after entering the season with a 9-11 mark on the slow surface. “She won Grand Slams and she was No. 1 way before I was. I’m still kind of new at this.”