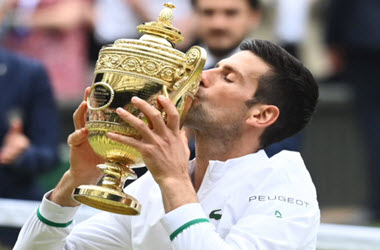 After defeating Matteo Berrettini in four sets in Sunday, Novak Djokovic entered the history books by becoming only the third man in history to win his 20th Grand Slam Title. The win puts Djokovic in the same league with Rafael Nadal and Roger Federer, both of whom share the prestige of winning 20 Grand Slam titles.

The final was not easy for Novak Djokovic, who had to fight hard to gain an advantage over Italy’s Berrettini after losing the first set 6-7. However, experience seemed to make the difference as Djokovic took the second and third sets, leaving the fourth to determine the winner. The victory gave Djokovic his sixth Wimbledon title.

“I have to pay a great tribute to Rafael and Roger. They are legends. Legends of our sport. They are the two most important players that I ever faced in my career. They are, I think, the reason that I am where I am today. They’ve helped me realize what I need to do in order to improve, to get stronger mentally, physically, tactically.”

In addition to his six Wimbledon titles, Djokovic has amassed nine Australian Open titles, three U.S. Open titles and two French Open titles. Djokovic is also the only other men’s tennis player in history other than Rod Laver to win majors in a row. Should Djokovic win this years U.S. Open, he will match Laver’s record as the only other calendar-year Grand Slam winner.

“I’m hoping. I’m going to definitely give it a shot. I’m in a great form and obviously playing well and playing my best tennis at Grand Slams is the highest priority that I have right now at this stage of my career. So let’s keep it going.”

The day was a big day for Italians as they tuned in to watch the Wimbledon final and the Euro Cup Final. The final on Sunday was Djokovic’s 30th appearance in a final at a major, and for Matteo Berrettini, it was his first. While Berrettini failed to score the nation a victory, their national football team overcame England in the shootout stage.

The opening match saw Berrettini and Djokovic making errors before settling into a rhythm. Djokovic had had a half dozen unforced errors, while multiple Berrettini had several double faults. The edginess for Djokovic resulted in him losing the opening set. However, after steadying himself in the second, he took control and managed to win the second while battling Berrettini’s quick-strike forehands and powerful serve. It was Berrettini’s serve and the 101 aces he recorded that helped get him to the final.

Few other opponents other than Djokovic were able to return his 137 mph serves, a feat he pulled off twice. Add in the huge groundstrokes, and Djokovic was put to the test by the 6ft, 5 Italian. At three and a half hours, the match saw the Serbian taking a three game lead in the third set, and it wasn’t until the mid-way point in the tiebreaker that Djokovic was able to shut the Italian down and win the final set and title.

There was no doubt that the 15,000 fans in attendance were on his side, even while cheering on Berrettini. Fans could be heard chanting the Serbian’s nickname “No-le!” while others chanted “Ma-tte-o!” in support for Berrettini. While the Serb seemed to need time to find his pace in the first set, Djokovic is a fighter and battled back to thwart the efforts on Berrettini. In the end, the effort saw Djokovic lay down the grass, clearly exhausted from the effort as fans cheered in the stands.

However, few doubted the Serbian would falter against the younger, stronger and less experienced Berrettini. In his last three majors, Djokovic was able to beat the likes of Daniil Medvedev and Stefanos Tsitsipas, both in their mid-twenties. While he may have made over twenty unforced errors, it was clear that his accomplishments were met with respect from Berrettini, who commented post-match, “He’s writing the history of this sport, so he deserves all the credit.”

With Djokovic still playing as good as he ever has, the upcoming U.S. Open slated for the end of August will be another show of his abilities, even at the age of 34. For tennis punters, knowing the Serb won 34 of 48 points at the baseline goes the distance when making informed betting decisions. Of course, with Canadian tennis bookmakers offering free bets and superior odds in his favour, his track record during volleys is also something to consider betting online on the U.S. Open or any of the events leading up to the Open.