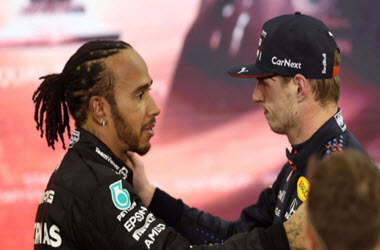 Lewis Hamilton and Max Verstappen embrace at the end of the Abu Dhabi Grand Prix after Verstappen took the checkered flag.

After a controversial finish to the Formula One season finale, Mercedes announced on Thursday it has withdrawn its appeal over the finish that cost Lewis Hamilton his record-breaking eighth world championship.

Immediately after Sunday’s race, Mercedes filed two protests over decisions relating to a late crash involving Nicholas Latifi and the restart of the race on the final lap, which helped Max Verstappen beat Lewis Hamilton for the F1 Championship title.

The FIA dismissed both protests, after which Mercedes asked the decisions be reconsidered at the International Court of Appeal.

“We left Abu Dhabi in disbelief of what we had just witnessed. Of course, it’s part of the game to lose a race, but it’s something different when you lose faith in racing.”

The main protest filed by Mercedes was the deployment of the safety car with only five laps remaining. Lewis Hamilton had dominated the race and 12-seconds ahead of Max Verstappen at the time of the incident.

While the safety car was deployed, Verstappen pitted for fresh tires while Mercedes opted to keep Hamilton on the track. Initially, the race director ruled that lapped drivers could not pass the safety car, only to reverse that decision later. That decision allowed Verstappen to resume the second place position and ultimately pass Hamilton and go on to win his first F1 World Championship.

The decision also resulted in Hamilton being denied his eighth world championship and being crowned the best driver in Formula One history. Mercedes made the announcement before the season-ending gala in Paris, stating that Lewis Hamilton was part of that decision making process.

Many fans and drivers felt the protest filed by Mercedes over how the race director applied safety car rules in a new way had merit, especially considering the commanding lead Hamilton had over Verstappen. Mercedes claimed its appeal was in the “in the interest of sporting fairness”, and after discussions with Formula One and the FIA, it was satisfied over clarity on the rules “so that all competitors know the rules under which they are racing, and how they will be enforced.”

On Wednesday, the FIA announced it will carry out a full analysis of the ending and that the incident is “tarnishing the image of the championship.” They also forwarded a report to the World Motor Sport Council in Paris and added that another review of how the race ended will help to understand why the race ended in the manner it did.

In response to the FIA announcement, Mercedes said they welcome the decision by the FIA and its installing a commission to understand what happened and to improve the rules, governance and decision making in Formula 1.

Mercedes also took the opportunity to congratulate Red Bull and Verstappen, saying the Dutchman delivered a faultless performance”, before adding,

“We would like to express our sincere respect for your achievements this season. “You made this Formula 1 championship title fight truly epic. Max, we congratulate you and your entire team. We look forward to taking the fight to you on the track next season.”

For Red Bull’s part, team principal Christian Horner has called for the end of the controversy and stated that several variables were out of the team’s control, starting with the crash by Canadian Nicholas Latifi.

“We didn’t ask Nicholas Latifi to crash, that happens.And we found it surprising that Mercedes strategically, you know, they left Lewis out on a set of tires that had to have been close to 40 laps on them. So of course, if the race were to restart, he was going to be vulnerable. Strategically, that was a mistake. I think we made the right strategy call, and as the following car on a track that isn’t easy to overtake, Max still had to make that pass. And he did it,” Horner said. “A safety car caused by Williams gave us an opportunity to throw something strategically at those last five laps and it paid off.”

Now that the appeals are off the table, Formula One can focus on the new season ahead, which is only three months away when F1 rolls in Bahrain. As of now, it is unknown whether Lewis Hamilton will return for his 15th season, or whether his disillusionment over the ending of the season will result in his retiring from the sport.