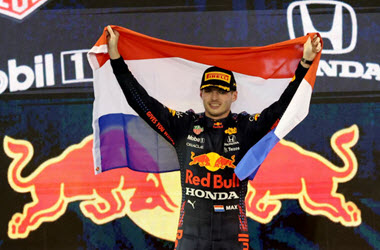 Max Verstappen stands atop the podium after winning the Abu Dhabi GP and the 2021 Formula One Drivers Championship.

After one of the most dramatic seasons in Formula One and one of the most dramatic last laps, the season should have come to an end when Max Verstappen crossed the finish line at the Abu Dhabi Grand Prix ahead of Lewis Hamilton. Instead, Verstappen was left waiting for five hours before the FIA denied several protests lodged by Mercedes over the controversial finish that denied Lewis Hamilton his eighth world championship victory.

Unfortunately, the protests are not over as Mercedes filed a request for reconsideration with the International Court of Appeal. Shortly after Mercedes filed the paperwork, Lewis Hamilton let the Yas Marina Circuit without responding to the media. However, when asked to comment over the protects with the FIA, Max Verstappen said he didn’t have” much really to say about that before adding,” I think it also sums up a little bit the season.”

The controversy surrounding the Abu Dhabi Grand Prix finish began with five laps to go when a crash by Nicholas Latifi resulted in the safety car being dispatched onto the race track. That left race director Michael Masi with the decision to either clear the track for one last lap of racing or let the race finish under the yellow flag.

After taking over the lead from pole-sitter Max Verstappen at the start of the race, Lewis Hamilton dominated the Abu Dhabi Grand Prix leading 51 of 58 laps. Hamilton was minutes away from setting a new win record of eight world championships and becoming the best driver in the history of F1 when the Latifi accident brought out the safety car.

However, Masi’s decision to go green for the final lap of the Abu Dhabi Grand Prix allowed Verstappen, who had pitted for new tires under the yellow, to pass Hamilton, in turn, five and cross the finish line ahead of Hamilton. It looked like Hamilton was going to retake the lead in turn nine but was unable to pull off the move before seeing a title fight that will go down in the record books as one of the best ever.

This was the first time since 1974 that the top two contenders for the Championship were tied in points going into the final race. Both Verstappen and Hamilton arrived in Abu Dhabi tied in points after a contentious season that saw the two sparring all season, with one resulting in Verstappen being sent to hospital.

The ensuing battle resulted in a bitter battle between Red Bull and Mercedes that only increased as the title fight intensified. For fans, it was a season of action and on and off the track drama that was reminiscent of the battle between Niki Lauda and James Hunt in 1976 and Alain Prost and Ayrton Senna in 1990.

The tension was even greater heading into the final race after Lewis Hamilton won three back to back races to tie up in the points. It appeared he was on his way to a fourth before the Latifi crash, and the Brit was overheard on the team radio with an expletive fueled tired.

The controversy over Masi opting to resume racing for the final lap gave Red Bull the chance it needed
after it lobbied for the race to go green. With Verstappen on fresh tires and Hamilton on worn tires, the Dutch driver chased down and passed Hamilton before driving to victory.

As Verstappen exited his car in the winner’s circle, he was soaked in champagne as he received hugs and congratulations from other drivers, including Hamilton and his father, who was on hand to cheer on his son. Verstappen then made his way to the DJ stand and celebrated the music while Dutch fans celebrated his victory.

“My goal when I was little was to become a Formula One driver and to go for wins, to be on the podium. When they play the national anthem, you want it to be yours, and when you stand here and they tell you that you are the world champion, it’s something incredible and special.”

While Mercedes may feel it was denied a victory, the reality is Red Bull was the dominant team this season. Verstappen racked up ten victories, equal to that of his first six seasons in Formula One, led 652 laps and had eighteen podium finishes.

However, the Dutch driver was heavily criticized for his aggressive driving style towards Hamilton, who himself stated was over the edge. Verstappen has been vocal over his displeasure at how he has been treated by race stewards, who he felt often was different from how officials treated other drivers, including Hamilton.

Verstappen had repeatedly stated before the race that he didn’t want race to control to have any part of the final. However, it went in the Dutch drivers’ favour when they did.

“I think (the track) was clear, so why would you run it out behind the safety car. When everything is clear, you have to release the track, so I think that’s a fair point from the race director. Of course, now it works for me. But it also works against me, I know that.”

After the race, Hamilton was absent from the post-race news conference with Max Verstappen and Carlos Sainz. In January, Hamilton, who will be 37, won eight races this season, the fewest since 2013 when he came in fourth in the standings.
However, Hamilton did carry out one interview before the post-race conference and praised the effort made by Mercedes this season.

“It’s been the most difficult of seasons. I’m so proud of them, so grateful to be on the journey with them. We gave it absolutely everything, we never gave up and that’s the most important thing. I’ve been feeling great in the car this past couple of months, particularly at the end. But if I’m honest, we’re still in the pandemic and I just wish everyone to stay safe and have a good Christmas with their families, and we’ll see about next year.”

This was Red Bull’s first Championship win since winning their first in 2013, since then, Mercedes has won back-to-back championships, and their mood over the loss was sour as they watched Hamilton sit motionless in his car after the race for several minutes.

After the race, Max Verstappen’s father, Jos Verstappen, a former Formula One driver and teammate of Michael Schumacher, gave his son a long hug.

“With my dad, traveling through all of Europe, for that one goal to be in the Formula One, to hope that you can win a race and hear your national anthem, and then of course the ultimate goal is the world championship, which is very hard to achieve.”

That mission was accomplished, and to celebrate, Red Bull ended their winning season by playing “We are the Champions”.