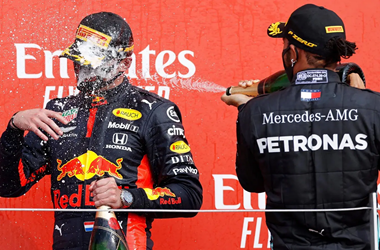 The running of the 70th Anniversary Grand Prix at Silverstone appeared it would be a repeat of last weekends Formula 1 race. However, after Mercedes ran into problems, Max Verstappen pulling off what many are calling the surprise of the year.

The start of the race looking like most this season, with Mercedes in the top two positions. However, both Hamilton and Bottas fought to deal with blistering tires leaving them to pit early and watch as Max Verstappen took over the lead, and while the three swapped the lead several times, it was Verstappen who gained the advantage.

“I didn’t see it coming but after the first stint it seemed we were really good on tires,” Verstappen said after his ninth career win. “We had a lot of pace in the car. I didn’t have any tire issues and we kept pushing. It was an incredible result to win, so everything worked out well and I am very happy.”

It was expected that Mercedes would earn its fifth victory this season, but that wasn’t to be after both drivers fought to deal with tire issues, and that opened the door for Red Bull to take charge. Hamilton, who won the British GP the previous week, spoke about the challenges post-race stating,

“It was a massive challenge. Congrats to the Red Bull team and to Max. They didn’t have the problems we had today. It was definitely unexpected to have the blistering as hardcore as we experienced. I was nervous the tire was going to explode but I am grateful I managed to progress and get through the race.”

While Hamilton may have finished in second, he still holds a 30 point lead in the drivers’ championship over second place Max Verstappen. Formula 1 now heads to Spain for the Spanish Grand Prix next week, and for F1 fans, today’s finish is fueling speculation among sportsbooks that Hamilton could face a challenge this year.

Mercedes have once again dominated the field this year, and after Lewis lost the lead going into the first corner, it looked like it would be another Mercedes battle between the two. However, after Verstappen got past Nico Hulkenberg at the start of the race, he put pressure on the Mercedes causing them to fight hard to defend their position and ultimately in the process, causing them both to suffer early wear on their medium compound tires.

After sensing Lewis and Bottas were struggling, Verstappen continued pushing, even ignoring team orders to protect his own tires saying to his team over the radio,

“This is the only chance to beat Mercedes. I am not going to sit back like a grandma.”

It took Verstappen only 13 laps to force Bottas in for a tire change, and Hamilton followed suit on lap 14, and that put Verstappen in first After he pitted for new tires of his own and more fuel, he regained the circuit just behind Bottas, but before the lap was over, he had regained the lead. Hamilton, Bottas and Verstappen battled back and forth trading places several times through the 51 lap race. However, after Bottas and Verstappen entered the pits with 20 laps remaining, Hamilton stayed out hoping for a fast lap.

After pitting on lap 41, Hamilton re-entered in fourth, and after posting the fastest lap of the race, he overtook Charles Leclerc and then began pushing hard to catch Bottas, and while Hamilton managed to take over second place, it was not enough to catch Verstappen, who had built up an eleven second lead over the British driver and fan favourite.