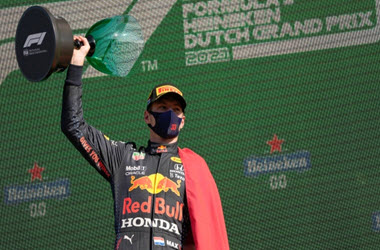 Max Verstappen waves to fans on Sunday after winning the Dutch Grand Prix and retaking the lead in the drivers championship.

Max Verstappen brought his home crowd to their feet on Sunday after winning the 2021 Dutch Grand Prix putting him back in the F1 championship lead away and Lewis Hamilton in second. While only three points separate the two, it was a win that saw Verstappen draping himself in the Dutch national flag as he stood on the podium.

For a race that included King Willem-Alexander among the spectators, Verstappen drove to a spectacular win after taking the lead away from Lewis Hamilton. By the time he crossed the finish line on lap 72, Verstappen had built up a 20.932 lead over Lewis Hamilton.

“Incredible feeling, of course, to win in front of the fans, because the king was watching with the royal family. Just an amazing day.”

With 13 races completed, the fight for the drivers championship has seen Mercedes failing to retain their dominant position. Verstappen sits three points ahead of Hamilton, who is attempting to win his eighth championship. If Hamilton succeeds, he will surpass the record set my Michael Schumacher and join the list of F1 greats.

However, Verstappen is hoping to win his first Formula One championship and is not making the job easy for Hamilton. The Dutch driver has earned seven pole positions this season and racked up seven wins. In comparison, Hamilton has four poles and three wins, and that leaves him in a precarious position, one the Brit is not accustomed to experiencing.

The 2021 Dutch Grand Prix was Verstappen’s 17th win in Formula One, and while he finished almost 21 seconds ahead of Hamilton, it was exaggerated due to the mishap between Mercedes telling Bottas to abort his fastest lap attempt and having to pit Hamilton for fresh tires in order to retrieve it.

After exiting his car, a triumphant Verstappen wrapped a Dutch Flag over his shoulders before waving it and celebrating the win with his fans.

“The expectations were high and it’s never easy to fulfil that, but I’m so happy to win here and to take the lead as well in the championship. It’s just an amazing day with the whole crowd.”

Verstappen’s fans turned out in droves on Sunday, with the spectator areas filled with a sea of orange and feet stomping as Verstappen crossed the finish line. Valtteri Bottas, who led in the race after the first round of pitstops, finished in third, while Pierre Gasly took fourth, Charles Leclerc first, and two-time champion Fernando Alonso fished out the top six.

The Dutch GP was the sixth out of seven races that Verstappen earned the pole position after a superb qualifying session on Saturday. Hamilton and Bottas sat in the second and third positions but were unable to gain ground on the start after Verstappen closed the door on Hamilton.

“The start was very important, I think we did that well. Mercedes tried to make it difficult for us, but we countered them all the time really well.”

Red Bulls team principal Christian Horner said after the race that Verstappen’s drive was “epic” as he embraced team mechanics and engineers in the paddock. With Red Bull faster than Mercedes, they did all they could to apply pressure.

Hamilton was called in on lap 21 to change tires but the move was left ineffective after Red Bull bringing in Verstappen, who re-entered two seconds ahead of Lewis Hamilton. Putting Bottas momentarily in the lead.

Overheard on the team radio, Red Bull told the Dutch driver that catching and passing Bottas was critical. After passing the Finn on lap 31,and Hamilton doing likewise, Mercedes pitted Hamilton for another tire chance on lap 40 in hopes of reducing his 1.5 second deficit.

However, Red Bull once again called in Verstappen on the next lap only this time, he re-entered three second ahead on Hamilton and increased the Brits frustration, which was over head on the Mercedes team radio. That frustration also saw Hamilton disagreeing with the team when ordered to preserve his tires versus damaging them in an attempt to catch Verstappen. After being heard saying “What, and don’t race?” Hamilton was given the green light to continue pushing.

Those efforts were in vain as Verstappen coasted to an easy victory, much to the delight of his fans. With the F1 season heading to Italy next weekend for the Italian Grand Prix, Verstappen is hoping to continue the momentum of his last two races, and for punters wanting to bet on whether Hamilton wins his 100th F1 victory, they have multiple promotional options they can avail with Canadian friendly sportsbooks such as Bodog, 888Sport and others.

While frustrated with the results and the ineffectiveness of their race strategy, Hamilton was gracious during media interviews.

“What a race, what a crowd. It’s been an amazing weekend. Max did an incredible job so a huge congratulations to him. I gave it absolutely everything.”

Before ending the session, Hamilton said he would leave this year’s Dutch Grand Prix would with fond memories.

“The last lap was one of the best parts of the race for me. This is now one of my favorite tracks.”

When asked if he felt the Circuit Zandvoort was better than Silverstone, Hamilton’s stated the British GP is his favourite, before adding,

“Where I think this track is probably better than Silverstone is that at Silverstone the grandstands are so far away. You need binoculars, but here they are right on the track.”