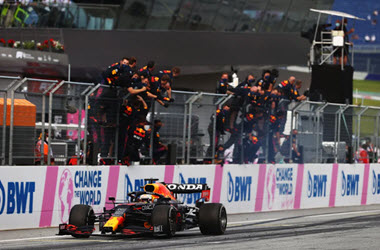 Max Verstappen cross the finishing line at the Styrian GP earning the Dutch driver his first ever back-to-back wins in Formula One.

This season has seen a remarkable shift at the top of Formula One teams, one that has seen Mercedes dropping out of the number one spot. Driving for Red Bull, Max Verstappen has stood on top of the podium in half of the races this season. By all accounts, with a car that continues to improve, that won’t change anytime soon.

After winning pole position, Verstappen led the Styrian Grand Prix from the beginning, held the lead straight through to the finish thanks to the consistency and balance of the Red Bull car. When asked about the race results, Verstappen stated during the post-race media session,

“I could keep my pace consistent to the end. The balance of the car was the best so far this season.”

Verstappen has now won thee out of the last four races and would have won all four had it not been for a tire issue in in Azerbaijan. After getting a clean start, Verstappen was able to hold off an early attack by Lewis Hamilton and ended the race a full 35 seconds ahead of the Mercedes.

However, Valtteri Bottas managed to get some revenge from last weeks race when he finished ahead of Verstappen’s teammate, Sergio Perez. Once again, Red Bull and Mercedes held the top four positions for the fourth consecutive race.

The drive by Verstappen clearly showed Red Bull has made great strides in improving its overall performance and speed. Verstappen consistently increased the gap between he and Hamilton by a few tenths each lap and by lap 10, was ahead by three seconds from the get-go.

For Verstappen, he stated that the balance of the car felt good and was noticeable straight away before adding,

“It was good to manage the tires basically from the start. We just kept on going, trying to hit our lap times and that worked really well today.”

The in on Sunday’s was Verstappen’s 14th, and it earned him another 25 points and increased his lead over Hamilton to eighteen points. With Red Bull taking over the dominant position, the odds of Hamilton earning his eighth drivers championship this year is quickly unravelling.

While many consider Hamilton less of a driver than fellow seven-time champion Michael Schumacher, Hamilton is not concerning himself with the championship as fifteen races remain.

“I try not to concern myself with that. Naturally, they are faster so there is not a lot I can do in that respect,” Hamilton said.

With the Mercedes losing 0.25 seconds on the straights, Hamilton was left with few options. While he pushed hard to try to shorten the distance between the two, he had to pull back to manage his tires. With no chance to jump into the lead, Hamilton opted to pit and, on re-entry, managed to record the fastest lap time and an extra point.

“It was a bit of a lonely race, really. I was trying to keep up with those guys but the speed they have… They obviously made some big improvements over the last couple of races,” It was impossible to keep up. I don’t know where we are losing all this time.”

Even though Mercedes could not get in front of the faster moving Red Bull, Bottas managed to score the second fastest time during qualifying, but after spinning in pit lane, he was hit with a penalty that dropped him to fifth on the grid.

Red Bull had their own problems, and if not for a slow pit stop, they could have seen both cars in the top three finishing positions. The Styrian GP is the home circuit for Red Bull, and no better place to extend their lead.

Next week will see Mercedes and Red Bull once again battling for the dominant positions as F1 heads to Austria. Of course, with an action-packed few weeks of back-to-back weekend racing, punters have the unique ability to use the recent standings to gauge and place bets with bookmakers on the outcome in Austria.

If things continue as they have for the last four races, the odds are drastically in favour of Verstappen adding to his career wins. More importantly, his lead in the drivers’ championship and Red Bulls in the constructor championship.