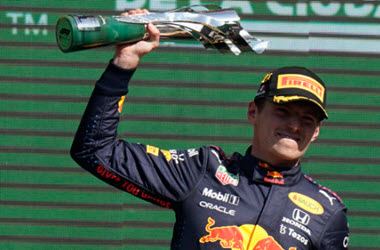 max Verstappen celebrates after winning the Mexican Grand Prix and increasing his lead over Lewis Hamilton by 19 points, his second back-to-back victory

After starting third on the grid, Max Verstappen increased his lead in the drivers’ championship over Lewis Hamilton with a dominating victory at the Mexico City Grand Prix.

The Mexican Grand Prix was also a day of success for Red Bull after Sergio Perez finished in third place and became the first Mexican F1 driver to finish in the podium. The result also saw Red Bull shorten the gap with Mercedes in the team championship.

As Max Verstappen and Sergio Perez enjoyed the chants coming from fans, Sergio Perez’s father was seen waving the Mexican flag. As for Hamilton, he could only look on as he watches his odds of winning his eighth F1 season title becoming less likely, at least this year.

With four races remaining, Verstappen now has a 19 point lead over Lewis Hamilton heading into the Brazilian Grand Prix in Sao Paolo, a track Verstappen is favoured to win. While online bookmakers are favoring Verstappen, Hamilton and Mercedes biggest worry is Red Bull’s speed.

“Today with their superior speed, if they work to carry that into the next ones, we may be in trouble, or we will be in trouble.”

The win gave Verstappen his ninth and second consecutive back-to-back win this season. If successful, it will be his first Championship title in Formula 1, but at 24, he is not taking anything for granted.

“I don’t believe in momentum. Every single race we have to nail the details….Its going to be really tight and exciting through to the end.”

Lewis Hamilton and teammate Valtteri Bottas surprised many by starting the race on the front two positions. Upstaged by Bottas, Hamilton started in the second position, while Verstappen and Sergio Perez started in this and fourth.

However, the advantage of starting at the front of the grid didn’t last long after Verstappen had a flying start and used the slipstream created from Valtteri Bottas down the long straight to take the lead coming out of the first corner.

After McLaren’s Daniel Ricciardo tapped into Bottas, causing him to spin out, it left Hamilton without Bottas and sandwiched between Verstappen and Perez. The problem for Mercedes had they even managed to hold onto their position is over the long haul, Hamilton himself said Red Bull’s speed would be too hard to match.

There is no denying the pass happened far soon than Mercedes expected, a fact that was evident to Toto Wolf’s annoyance over the dominant Red Bull speed. Wolf was also annoyed at Bottas being knocked down to 15th after contact with Daniel Ricciardo.

“We had two cars in front and seemed to open up the sea for Max to come around the outside, and even so, even with the spin afterwards (and) a complete loss of points, it could have been a third or fourth place. It is annoying to say the least.”

After Verstappen took over the lead, it left Lewis Hamilton to play defense against Sergio Perez as he attempted to stay in second and earn as many points as possible so as to keep Max Verstappen within reach in the title fight.

With thousands of hometown fans, Perez was cheered on after he briefly took over the lead when teammate Verstappen and Hamilton both pitted for new tired simultaneously. They also came to life as Perez closed the distance between him and Hamilton in the closing laps of the race, but unable to make a move, he had to settle for another third back-to-back podium finish.

“Now it’s time for some tequila. Being on the podium in your home grand prix is something very, very special. Today, I wanted more. I wanted to win the race…At the end of the day, we are so competitive, we finish third (and) we really don’t enjoy. Today is one of those days that I must enjoy.”