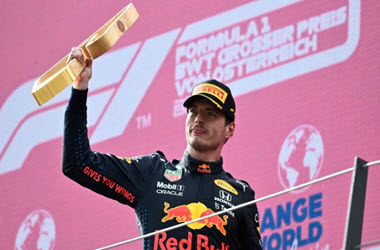 It was another weekend of racing at Spielberg, Austria. Another that saw points leader Max Verstappen earning his third back-to-back victory increased his lead to 32 points over second place Lewis Hamilton.

After nine races, the tides have changed. It gives Mercedes reason to pause after Max Verstappen and Red Bull dominate in the same way that Mercedes and Hamilton did for the past on Sunday the Austrian Grand Prix Verstappen is now being seen as the favourite to win.

“When you go into the weekend and everyone sees you as a favorite, it’s not easy to deliver.”

The win saw Verstappen extending his lead in the points championship to 32 over second place Lewis Hamilton. In the last five races, Verstappen has won three, earned the pole position in two of the last five and now has fifteen career wins to his name.

“I’m enjoying it, but I’m very focused for the rest of the season. It’s still very long.”

Hamilton, who was in line for a podium finish, saw his hopes dashed late in the race after going wide and driving over the curb, damaging the floor of his car. The frustration over the last three races and his car’s performance is costing the Mercedes points.

“Obviously it’s frustrating to lose so much downforce on the rear of the car and not be able to hold onto second. A lot of points lost today.”

Hamilton, who has now not won a race for almost two months, seems to be having an impact, and it is not helping the Verstappen fans are coming out in droves. The crowds were a sea on orange as they celebrated the Dutchman’s third in a row victory.

The only celebration for Mercedes was teammate While Valtteri Bottas managing a second place finish ahead of Lando Norris. Norris pulled off a late race pass to take third away from the struggling Hamilton regulating the seven-time champ to fourth place.

The third place finish for Lando Norris made him the youngest Brit to stand on an F1 podium and the third youngest in history. The other two who managed the same achievement were fellow drivers and race winner Max Verstappen and Lance Stroll. Had Norris not been hit with a five second penalty for forcing Sergio Perez off the track on the opening lap, he could have earned a second place finish.

“It was exciting. I’m disappointed because we should have been in second place. We had good pace. It’s nice to know that we can be there and can race. Hopefully we can keep it up next time.”

The race was another success for Red Bull, and Max Verstappen at the teams home track in front of adoring fans. In addition to taking his third back-to-back pole, he racked up his 15th career win after getting away clean on the start.

Adding to the day’s success, Verstappen earned a bonus point for recording the fastest lap. However, Hamilton is still waiting to record his 100th win and is hoping Silverstone, his home track, will see that come into fruition.

As for Verstappen, his jubilation was obvious after he drove to the winners’ circle. After bringing the car to stop, he leapt into the arms of his engineers and mechanics while fans cheered in the stands.

“Seeing so many fans here and so much orange here is just incredible.

The race was not without incidents, and it was only three laps in before the safety car had to be deployed. This cam after Esteban Ocon was caught between to Haas cars and suffered a broken wheel rod.

Verstappen shot ahead of the pack when the race restarted while teammate Sergio Perez attempted to overtake Lando Norris but ended up in the gravel instead before re-entering in 10th. That incident resulted in Norris being handed a five second penalty and ultimately costing him a second place finish.

However, Norris was far from done and battled Hamilton hard for third place, eventually succeeding and earning himself a third place finish. The skill of Norris as a young driver was not lost on Lewis Hamilton, who commented that the fellow Brit is a great driver.

Next up for F1 fans wanting a slice of the action with top Canadian bookmakers is the British Grand Prix, one of the year’s more prestigious races and one Lewis Hamilton will be desperate to win. However, if Red Bull has anything to say about it, the odds are not in his or Mercedes favour as clearly Red Bull now has the advantage they enjoyed for so long.