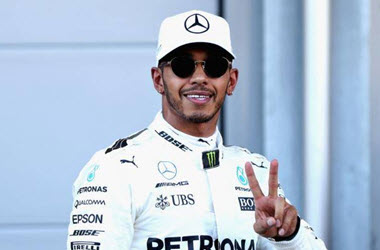 After winning pole position for the Turkish Grand Prix on Sunday ahead of rival Max Verstappen and teammate, Lewis Hamilton was slapped with a 10 place grid penalty and dropped down to 11th on the grid.

The 10 grid penalty was in response to Hamilton and Mercedes exceeding F1 rules that allow for a maximum of three combustion engines per season. While the penalty was unwelcomed news for Hamilton as he battles Max Verstappen for the drivers championship, teammate Valtteri Bottas now takes over the pole position, while Verstappen starts in second.

During Saturday’s qualifying session for the Turkish Grand Prix, Hamilton finished with a time of 1:25.565, .13 seconds ahead of teammate Valtteri Bottas and .33 ahead of Max Verstappen, who recorded a time of 1:24.592. Charles Leclerc and Pierre Gasly took fourth and fifth, while Fernando Alonso, Sergio Perez, Lando Norris, Canadian Lance Stroll and Yuki Tsunoda start in the remaining top 10 grid position.

Hamilton will now have hope he can catch up to Verstappen, who has had some superb starts this season. However, the Dutch driver will have to contend with Bottas if he is to get his 18th F1 career win at Istanbul Park Circuit.

“I hope for a clean getaway but starting on the inside will be tricky. There is very low grip in both dry and wet conditions compared to the outside. We’ll try everything we can to keep the Mercedes behind but it’s not going to be easy, they’ve had great pace all weekend.”

The grid penalty for Hamilton comes as he looks for his 101st career win after finally getting his 100th at Sochi in Russia. However, that will be a challenge as he will have to deal with traffic while Max Verstappen will not. One of those Hamilton will have to contend with is Fernando Alonso, a two-time F1 champion with superior defensive driving skills.

“I imagine tomorrow is going to be difficult to move up. We’ve got the long straight down the back, so we’ll see what we can do.”

For his part, Verstappen was pleased with how the car performed and responded after making some improvements following Friday’s practice sessions.

“The laps were quite good. We lost a bit down the straight, we’ll have to look into that. Overall, quite a decent recovery from yesterday. Let’s wait and see what the weather will do overnight. Let’s see how competitive we will be in the race. Obviously tire wear is quite high around this track.”

Unlike his teammate, Valtteri Bottas is still on the hunt for his first win this season, and due to Hamilton’s misfortune, and the right race strategy, that could come this weekend.

“I’m on pole so should be good. I’ll focus on my own race tomorrow and try to keep up the good pace.”

The Saturday afternoon qualifying session left drivers having to contend with overcast skies and getting in laps before the track became too wet. That resulted in Carlos Sainz Jr. spinning off the track before managing to re-enter and complete the qualifying session, AlphaTauri’s Yuki Tsunoda also spun out, and Hamilton had problems on Turn 5.

Hamilton managed to finish ahead of both Verstappen and Bottas during the first qualifying session and did the same during the second session, albeit complaining about not being able to get enough heat into his tires.

Daniel Ricciardo, who has won eight F1 races, also experienced tire problems during both sessions. Charles Leclerc had issues with downforce and, after losing the back-end midway through the second session, still managed to finish the session with the third fastest time.

The Istanbul Park circuit has always been a celebrated stop in the season, and one F1 bookies offer competitive pricing for. With weather conditions calling for overcast skies and a chance of rain, this years race will not disappoint F1 fans.