The PGA Honda Classic proved to be a special tournament for Keith Mitchell after making a fifteen foot putt on the final hole earning a birdie in the process. That putt saw Mitchell earning his first PGA title and entry to the Masters.

“I was trying to focus on what was going on. My mind started wandering there a little bit at the end … and then I hit a great putt.”

Going into the final round, Mitchell was behind by one shot after hitting bogies on the first two holes and then dropping four shots in subsequent holes. After finding his groove, he managed to score birdies on the four holes and regained the lead.

Mitchell’s biggest challenger of the day was Koepka, who won the PGA Tour player of the year last year. However, he also faced a tough challenge from Fowler, who is a three time PGA winner and one popular on the tour with many fans in attendance looking to catch a glimpse of the star golfer. Koepka, who ended the day at 66 birdied his final two holes coming within one shot of Mitchell, and Fowler was right behind hitting a 67 including one hole that saw him sink a 45 foot putt.

While the pressure was intense, Mitchell seemed focused as he went into the final hole, a par 5. With 205 yards to go with his second shot, and sitting on the edge of a bunker, Mitchell drove the ball straight up the fairway leaving a 15 foot putt for the win. As he hit the ball, the crowds roared as the ball fell home. Mitchell raised his hands in celebration and then waited for the final group of golfers to complete the course.

Vijay Singh, at 56, was hoping to become the older player in the PGA to win the Honda Classic. Singh was one of those near the lead on the final nine but fell behind as his 17th hole tee shot went into the water pushing his final round to 70 and out of contention for the win finishing 6th for a $244.800.00 payday.

The LPGA tour also was in full swing over the weekend at the HSBC Women’s World Championship in Singapore. Sung Hyun Park managed once again to make her presence felt after hitting birdies on the first seven holes in the final round. That saw Hyun Park finishing the round at 8-under 64 for a two-shot and earning the victory and $225,000 payday.

The final round began with Park sitting behind Ariya Jutanugarn by four shots. Jutanugarn is the no.1 seeded player in the LPGA but failed to get the job done in the final round ending the day 11 shots behind Park, who caught up and left the no.1 star behind.

Minjee Lee had a strong final round and was in the lead at one point after Jutanugarn fell behind. She finished the round at 69 and earned a second place finish and $142,335 for her efforts. This win was Sung Hyun Park sixth win in the LGPA, and commenting, she said,

“I think my training in the last winter really helped me a lot, and it also helped me to be stronger with my play,” Park said. “I didn’t think I would win this fast. … I think I will play really comfortable the rest of my season.”

The PGA tour next heads to the Silverado Resort and Spa North in Napa, California. With a prize purse of $6,400,000, it will give punters a perfect opportunity to investigate the schedule entrants and place bets with leading PGA sportsbooks such as Bodog, who are welcoming new players with up to $200 in signup bonuses. The LPGA will resume in Arizona in two weeks for the Founder’s Cup and a $1,500,000 million purse. 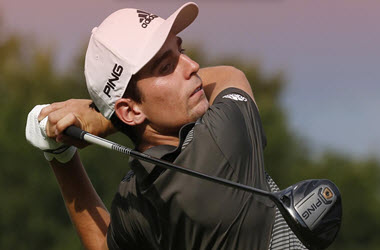 Joaquin Niemann Tales Lead at takes The Greenbrier by 2 Shot