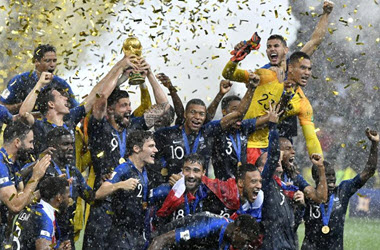 Nothing was going to stand in the way between France and Croatia from deciding who would win the World Cup – not even the rain-soaked field that greeted the finalist as they prepared to battle the final game. This was one party that would not be stopped.

As the game got underway, players from both teams slipped and slid their way like teenagers out for a day off school. Even Russian President Vladimir Putin was on hand to join the rainy festivities. Those festivities went on long after the final whistle blew and France was announced the winning of the 2018 World Cup.

France’s President, Emmanuel Macron posed for pictures in the locker room with players and enjoyed a moment of interruption with spraying champagne while coach Deschamps was in the post-game news conference.

Deschamps was happy to indulge his players, much like a proud father would his children. With a team of young and talented players, Deschamps said,

Even Antoine Griezmann joined in on the comments adding,

“Our children are going to be very proud. The World Cup, it’s a lot.”

His incredible speed was evident after four protesters took to the field at the 52-minute mark and he gave France their third goal of the game only 12 minutes later. Pussy Riot, a Russian punk rock band took credit for the spectacle as Putin looked on and now will have their day in front of a judge for their antics.

As the final whistle blew, and the French team ran onto the field in jubilation, Putin made his way onto the drenched field to hand out medals during the awards ceremony. As Hugo Lloris was handed the World Cup trophy, thunder cracked, and lightning streaked across the gloomy sky, but that did not stop him from hoisting it high in the air with pride. The stadium was filled with confetti that stuck to everything and everyone. It was a final act of celebration in what was a memorable world cup.

Mbappe is rise to success is one that legends are made of, and with only Pele being younger to score in a final game at a World Cup, Mbappe is sure to see his star rise in the coming years as he continues with his soccer career. Not even Ronaldo can claim such a prestige title, and for Mbappe, he said,

“I have a whole story to write. This is just the beginning.”

The other two players key to France’s success in the final were Antoine Griezmann and Paul Pogba with both scoring for France. First was Griezmann, who scored after being awarded a free kick. Croatia tied it 1-1, but thereafter, it was all France. After being hit with a penalty, Croatia watch in horror as Griezmann lined up and made it 2-1 to give France the lead once again. Yet. Mbappe was not done scoring the final goal to give France its 4-1 victory over Croatia.

Croatian coach Zlatko Dalic was not pleased by the officials call stating,

“In a World Cup final, you do not give such a penalty.”

“We were dominant, we had control. What we’ve had in terms of luck over the tournament, we lacked that today.”

However, for Deschamps, he joined the history books as only the third who has played as both a player and a coach to win a World Cup title. He joy was evident as he took to the field and lifted up players, flung them in the air and caught them with a big smile on his face – some accomplishments simply overtake emotion. 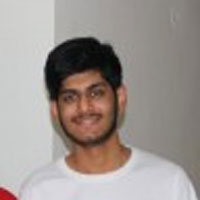