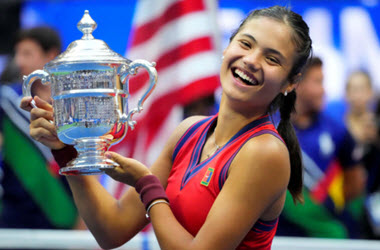 Emma Raducanu poses for the media after winning the U.S. Open on Sunday at the USTA Billie Jean King National Tennis Center in New York City.

Canada’s Leylah Annie Fernandez run at the 2021 U.S. Open came to an end on Sunday after she lost to the U.K’s Emma Raducanu in back-to-back sets.

The rising Canadian tennis star has a solid performance leading up to the final eliminating multiple top ten players in her bid to make the finals. After winning in two straight sets during the semis on Saturday, Fernandez was noticeably tired, and her eyes filled with tears at the end of the finals on Sunday.

However, while Fernandez was obviously hungry for the win, it seemed Emma Raducanu had more in reserves and succeeded in winning the first set 6-4 and the second 6-3. With fans in attendance, Leylah Annie Fernandez addressed was taken in by the affection as she lifted the runner-up’s silver platter.

Shortly after, Fernandez acknowledged to the New York fans that the timing of the final came as the world mourned the anniversary of the Sept. 11 terrorist attacks.

“Thank you for having my back, thank you for cheering me on. I hope I can be as strong and resilient as New York has been the last 20 years.”

What could have been a perfect finish for the Canadian tennis star ended up being a coming-out party for Britain’s Emma Raducanu. At 18, Raducanu took home the $2.5-million U.S cheque without giving up a single set.

However, for Fernandez, what was supposed to be a crowning achievement ended up instead being a final with a mix of controversy. After a week of near-flawless play, Fernandez struggled with her serve, only managing to land less than 60% of her first serves and double faulting five.

“Unfortunately, today I just made one too many mistakes, and I think Emma noticed it and she took advantage of it. I’m still disappointed. I think this loss, I’m going to carry it for a very long time, and I think it will motivate me to do better training and be better for the next opportunity I get.”

However, Fernandez did as she had throughout the tournament when it seemed she was struggling, tossing in a hard down-the-line forehand and a few backhands. Several times Fernandez took what looked like a sure-win for Raducanu and pushed hard to tie the match in what was often exhaustive rallies that failed to produce the ideal outcome.

One of those times came when Raducanu was leading 5-2 in the second set and about to win the championship point. Fernandez was able to battle back and win the game, while at other times, she would respond with a blistering cross-court forehand that Raducanu was unable to overcome.

However, Raducanu was more than skilled in firing back her own tricks, and at 18, she showed nerves of steel and often celebrated at winning a hard-fought battle.

“She played incredible tennis. I thought the level was extremely high, and I hope we play each other in many more tournaments — and hopefully finals.”

While usually an emotional player, Fernandez was more subdued throughout the first set, and only gave small fist pumps a few times, despite being encouraged by the crowds in attendance. However, she fist-pumped more in the second to celebrate her achievements, and likewise, gave nods to her family and trainer.

Midway through the second set, Raducanu bloodied her right knee during a sliding shot attempt and was allowed a time-out for medical treatment. While the delay seemed to frustrate Fernandez and the Canadian could be seen arguing with officials over the time-out.

However, after treatment, Brit advised officials she wanted to continue playing, much to the applause of the crowds. Fernandez later said she was unaware of the extent of Raducanu’s injury and said her objection was at the heat of the moment.

“It was just too bad that it happened at that specific moment, with me and the momentum that I had. It’s sports, it’s tennis, and you’ve just got to move on.”

Still, the U.S. Open was a great success for the Boynton Beach, Florida based Canadian. It was her first ever finals at the Open and more importantly, she defeated Angelique Kerber, Naomi Osaka, Aryna Sabalenka and Elina Svitolina to get there.

The irony of the final is Raducanu grew up in Toronto, Canada before moving to the United Kingdom when she was two. As for the WTA and punters wanting to get in on upcoming tournaments, sports bookies are expecting the remainder of the WTA schedule to go ahead now that restrictions have been lifted.