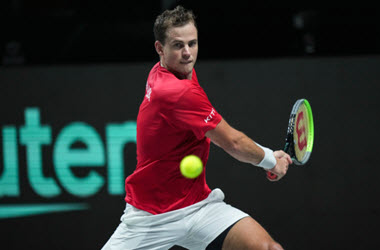 British Columbia’s Vasek Pospisil returns service against Kazakhstan’s Alexander Bublik in their opening round match at the 2021 Davis Cup on Sunday in Madrid.

The Canadian men’s international tennis team after being eliminated from the Davis Cup during the opening round on Sunday. Considering Canada was the runner-up at the last Davis Cup tournament in 2019, their 3-0 loss to Kazakhstan left fans saddened and surprised.

The Canadians, who lost their opening match against Sweden, ended this year’s tournament without recording a single win. A big part of the disappointing results was the absence of Canada’s two top players, Richmond Hill’s Denis Shapovalov and Montreal’s Felix Auger-Aliassime.

Shapovalov played an important role in Canada’s run in 2019 but lost 2-0 in the Championship tie to Spain’s Rafael Nadal. This year’s team, which was captained by Frank Dancevic, included Vernon, B.C’s Vasek Pospisil, Pickering, Ontario’s Brayden Schnur, Toronto’s Steven Diez, and Thornhill’s Peter Polansky, put in a solid effort but failed to achieve the results they needed to advance.

“Overall, I thought the guys played their hearts out this week. They did everything they could to try and get us through. We knew we had to win 3-0 today to have a chance and it was a really, really tough task. But in the end, we’ll keep our heads up, regroup, assess a few things from this week and move forward from here.”

Kazakhstan got off to a strong start on Sunday, winning the opening set 6-3 thanks to Mikhail Kukushkin. While Toronto’s Steven Diez out served Kukushkin 8 to 1, Kukushkin was able to convert four out of nine break-point opportunities, whereas Schnur only managed to break Kazakhstan in two of his six opportunities.

Schnur, who is ranked 234th, admitted to not playing well, and that was a contributing factor in their elimination and subsequent 6-7 and 7-5 set losses.

“The first set, obviously, I don’t think I played great. But it takes some time to adjust to his ball, everything is pretty much underspin on a wooden court that’s bouncing low already and very slow. So, I have zero regrets in the first set, it just took me a little bit of time to find my groove.”

The clincher and ticket to the 2021  Davis Cup quarterfinals for Kazakhstan came in the match between Alexander Bublik and Vasek Pospisil. Bublik served fourteen aces during the first and second set and only faced one breakpoint while breaking Pospisil in two of nine chances.

In a doubles match, Aleksandr Nedovyesov and Andrey Golubev defeated Canada’s Peter Polansky and Brayden Schnur to give Kazakhstan the sweep. That put the country at the top of Group B with five out of six wins against Canada and Sweden. Kazakhstan will now go on to face the team that finishes second out of the remaining five groups.

In other Davis Cup news, Britain and Croatia also advanced on Sunday to the quarterfinals after they won their respective groups. The team from Britain defeated the Czech Republic 2-1 in Innsbruck, Austria to win Group C, while Croatia beat Hungry and won Group D.

“Today was tough. You look at the rankings and a lot of people would think it’s going to be straightforward but it’s never like that. The Czech team played really well today, they are a very good young team. Machac looked like he had suddenly turned into a top-20 player overnight.”

For fans interested in punting on the 2021 Davis Cup quarterfinals ahead of the matches between Russia and Sweden, Britain and Germany, Italy and Croatia and Serbia against Kazakhstan, they will find favourable odds at Canadian favourite bookie, Bodog. With multiple promotional offers for new players up for grabs, and an equal number of returning player promos, the timing is perfect.